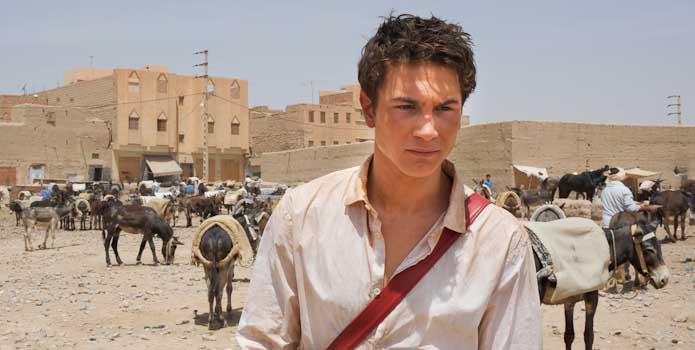 The highs and lows of father son relationships is one that is often explored in the world of cinema, especially within the festival circuit. Adventures that allow both men to interact and bond are usually presented through the road trip narrative archetype. Exit Marrakech or Morocco (the film is being presented with two different titles for reasons unknown), is a fresh new entry into this genre which uses the exotic Moroccan locale as the backdrop and additional protagonist in this warm story of different worlds, forbidden love and growing onwards.

Director Caroline Link does a masterful job with directing and writing duties, nailing the nuances between father and son dialogue, physical responsiveness and subtle body language that accolades her narrative even further.

Ben (newcomer Samuel Schneider) is just like any adolescent in the world right now; closed out to his family and teachers but Mr. Personality with his friends and strangers on the streets. Living a privileged life, Ben finds his summer turned upside down when he isn’t able to spend it with his fiends in Nice, France. Instead he packs his things and heads to Morocco, spending the summer with his estranged theatre director father (Ulrich Tukur). Once Ben arrives in Morocco, he is anxious to leave; spending very little time with his father and spending even less time caring about his father’s newest original stage production. Fearless and unwilling to except the faux hotel life his father has adopted, Ben surrenders to the streets of Morocco, inevitably finding friends, falling in love with a beautiful prostitute Karima (Hafsia Herzi) and skiing down the sand dunes of the desert. Exit Marrakech is an intelligent yet devious film that uses the foundation of the political, religious and economic uncertainties of the country at the forefront of the film and allows them to dictate key plot points that allow Ben to morph from a boy to a man in one seemingly idyllic summer.

Exit Marrakech won’t be the breakout film of the Toronto International Film Festival. nor will it see an extensive theatrical run due to its choppy and short lived emotionally empty editing choices and lack of chemistry with its actors. Schnider’s character, Ben, is the glue of the film, connecting the European with African cultures. But the film itself continues the trend Link has and her fascination with analyzing people out of their comfort zone.

Link’s 2001 Nowhere In Africa made a big splash and won the Best Foreign Language Film of the year Academy Award in 2002. Here, like with Nowhere In Africa, Link is fascinated with countries that have so many sides and worlds within its small boundaries. Morocco, a country with three languages, many political viewpoints, and an abundance of culture, is a fusion country with a polarized sense of identity. Which, mirrored against Link’s characters, seems just right.

The film is a satisfying festival piece that will deliver to its niche festival audience. Essentially, Exit Marrakech is a really safe way to explore the beauty of a gorgeous, misunderstood and mischievous city filled with pit-picketers, Gypsies and berbers. The film itself serves as a travelling art-piece and window for a safe distance to travel to a part of the world that isn’t as gracious and kind as it our protagonists make it out to be.