There is a certain respect for festival films, a respect that acknowledges the notion that no idea is too small or no ambition is too large for the subject matter of a feature film. Within the limited space of a logline, Felony sounds like a small, tired and exhaustedly simple idea for a narrative feature length film. Instead, this little film that could, turns out to be a complex parable of the power of choice, the innate instinct to survive and asks the question of, how is the goodness of a person measured?

The film begins by showing Malcolm Toohey risking his life and taking two bullets to his bullet-proof vest for the sake of justice–Malcolm is a celebrated police officer. Just as Malcolm’s credibility as a just and righteous cop is established, the filmmakers challenge the notion immediately. After getting in his car from the local pub, in celebration of their recent bust, Malcolm finds himself in a moral and ethical dilemma after he side-swipes a young boy on his bicycle. Unsure and hesitant at first, Malcolm calls the ambulance, which shortly brings police, emergency and medical services to the scene. Among those called to the scene, are veteran Detective Carl Summer (the always impressive Tom Wilkinson) and rookie officer Jim Melic (Jai Courtney) to investigate the scene and take statements. What starts off as a simple lie, builds and transforms itself in a catalyst of chaos that affects the lives of everyone involved.

It has been a long time that a film like this, with many layers, has left me with so much to say, yet has crippled my ability to say anything at all. This has been one of the hardest reviews to write for a long time, simply for my teetering opinion and questions that I find myself asking and answering for a solid final thought. First and foremost, kudos needs to be given to scribe Joel Edgerton. Edgerton, who has only just broken out into A-List acting territory after his tour-de-force in Gavin O’Connor’s Warrior, and this year’s The Great Gatsby, has crafted a script that tackles so many challenging and loaded, yet realistic hypocrisies or double standards within society. This realistic yet earnest interpretation is even more inspiring coming from a acting celebrity since, like police officers, civil servants or specialized professionals are exempt from certain laws, the celebrity lifestyle is one which also allows for certain leniencies or pardons simply because of its status. It seems like a very promising and intimate script from Edgerton who really hones in on his skill to humanize and empathize with his characters and their many layers of emotions and needs.

Along with Edgerton, the film is driven by its actors. Jai Courtney, who has since been a supporting man to some of Hollywood biggest actions stars (Tom Cruise in Jack Reacher and Bruce Willis in A Good Day To Day Hard)  has undoubtedly delivered his finest and most complex performance of his young career. Poised beside the legendary Tom Wilkinson, Courtney holds his own in a film that is bustling with new and old acting talent. Wilkinson’s Summer is a familiar character, yet the actor portrays Summer with an intensity and restrain that allows for the audience to agree and disagree with the characters actions, simultaneously. 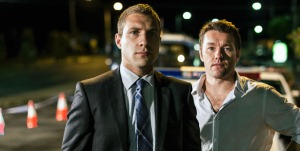 Felony is a film drenched with human emotion, guilt and truth. Director Matthew Saville does a wonderful job of giving the audience guidance as well as ambiguous interpretation in his tight shots and cuts. Giving his actors freedom and allowing for each actor to embody their characters, Felony is a real portrait of the mundane, the unexplainable and the misfortunes of good people. Showing similar parallels to another TIFF alumni and former TIFF Audience Award winner in Paul Haggis’ 2005 Crash,  Felony, at times, may seem too coincidental or gimmicky, but maintains its credibility as a drama thanks to its performances and strong script.

Felony shows that at the end of the day, its not about choosing sides or marking the bad guys or good guys, because, at any which day, anyone can be a good person or bad person. The thing that matters, like with any action, is that there is an equal or opposite reaction, and it is in the power of the individual, to make sure that that reaction, is one filled with passion, love as well as righteous moral/ethical intentions.

Sometimes, people find themselves at the wrong place at the wrong time, or vice versa. The film is a study to completely rebuttal Wilkinson’s character’s best line, “Time and the world, swallow events”, and challenge this notion by showing that it’s the choice of the individual that dictates the time we live in this world and the events that surround us.