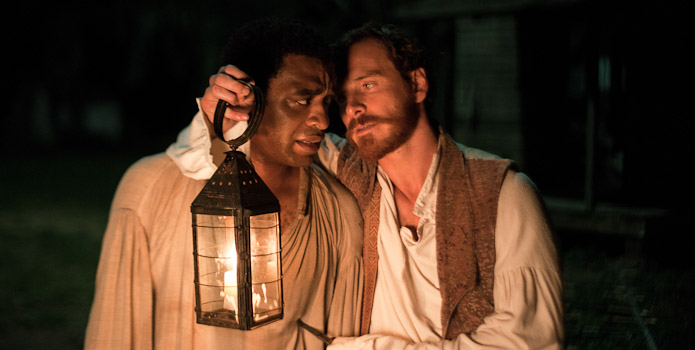 Every so often, there comes a film that is so grotesque, so brutal in its depiction on the degradation of the human spirit and the treatment of human beings, that it’s almost impossible to ignore. 12 Years a Slave is that movie. The film is a harrowingly real nightmare of a film.

Despite its relentlessly violent and disturbing content, the film is a must watch. The beauty of a film titled 12 Years A Slave, is it’s straightforwardness and self-aware narration. Like so many movies before it, this remarkable tale of Solomon Northup’s unbelievable journey of survival, may not be familiar from the character names, but the story shares many narrative arcs of other slavery driven melodramas. Fortunately for us, 12 Years a Slave breaks its cliché stigma thanks simply to one of the greatest living directors working today, Steve McQueen. McQueen, an enigmatic British story teller, has had indie success since his riveting Hunger and more importantly, the sadly overlooked Shame. Having an incredible visual understanding as well as dramatically perverse eye, McQueen captures an unapologetic and extraordinary film of the tackle of evil, and the eventual glory of justice.

12 Years a Slave is a film based heavily off of Solomon Northup’s memoir Twelve Years A Slave. Gestating from Solomon’s life as an acclaimed violinist, to the cruel unwilling insertion of Solomon to slavery in the Deep South, the film takes very little liberties of Northup’s brave literary piece. Chronicling Solomon’s decade plus of slavery, from plantation overseers to slave owners, and all the people that he meets in-between, Northup the man, and the character, is truly a testament to the extent of the human spirt and the marvel of selfishness and tolerance.

Slavery is a subject that cannot be ignored when flipping through the pages of history books, especially American history. As sad as it is to admit, slavery is just as much a part of learning of the past as glory and success is. The thing about the subject of slavery when it comes to the film medium is that audiences already know what to expect; lashings, whippings, lynching, sexual and physical abuse, injustice and unexplainable cruelty. The difference between knowing these facts and seeing them on the screen, is the emotional response the poetic visuals provide. Like any spectacular painting, this moving piece of art is like any paint-to-canvas product, more stunning and hypnotizing the longer you stare at it.

Many could argue that 12 Years A Slave is an overly dramatized, artsy recantation of a man’s struggle to freedom. From grueling, neck-breaking long takes, to several extreme close ups, to musically laden chants, the film is a fine piece of cinematic showcasing for its director and many talented individuals involved. 12 Years A Slave is, without a doubt, McQueen‘s most commercial work. But do not get discouraged, because unlike so many talented directors in the past to substitute commercial success with artificial, flaky pieces of cinema, McQueen uses his talent to attract one of the film’s most talented qualities, its cast.

Unflinching and naturally statuesque is Chiwetel Ejiofor, who will no doubt get some Oscar recognition, and perhaps even a win for his enslaving portrayal of Solomon Northup. Ejiofor inhabits a passion of previous confident actors in his role as Northup similar to that of Poiteir, Washington and Redford. From the start of McQueen’s body of work, one of the most noticeable and gratifying similarity all three lead males share, is the control and power of their gaze. From Michael Fassbender in Hunger and Shame, and now to Ejiofor in 12 Years, Ejiofor and McQueen create a fiery, personal relationship of gazes and stares that act as another character for audience members to empathize with. Whether it be on a train, hungrily undressing a redhead in the opening scene of Shame, to a hopeful yet empty stare into the humid swamps of the South, it is in these simplistic stares and silent revelations where we weep, we cry, and we feel an immense sorrow for a man stripped of everything.

Along with Ejiofor and also destined for Oscar recognition is Lupita Nyong’o. Accepting and willing to succumb to death rather than live a life of slavey and the apple of her owner Edwin Epps’ (Michael Fassbender) affection, Nyong’o delivers in a way that could only be best described as classical and timeless; a way that only Jane Eyre enthusiasts could comprehend. 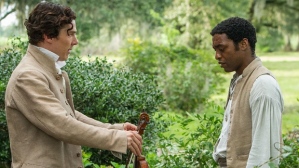 Sharing in the glory of McQueen‘s amazing ability to retrieve the best performances from his actors, are of course, Michael Fassbender, frequent collaborator and McQueen’s muse, as the epitome of evil Edwin Epps; to Paul Giamatti as the inhumane slave merchant; to Benedict Cumberbatch as the remorseful Master Ford; to Scoot McNairy as the deceitful Mr. Brown; to the always brilliant Paul Dano as the crippling Mr. Tibeats, and of course the ingenious Brad Pitt as the heroic Canadian carpenter Mr. Bass, this film will serve as a definite fine point in all the careers of these already talented acting forces.

12 Years A Slave is all around, a solid example of the fine points of collaboration. John Ridely‘s script is a brilliant literary work that excels most during the lyrical and doomed dialogues between slaves. Composer Hans Zimmer orchestrates a chilling score that, at moments, gives hope, and at other times, deepens one’s sorrow. The film is a great, big authoritative film of the finest artists working in Hollywood today.

Chances are, 12 Years A Slave will chill your warm heart and bury any previous empathy for the slaves in Tarantino‘s Django Unchained into the dirt. There is no silver lining here; McQueen‘s sprawling slavery epic is a depressing, death-filled account of past reality. In each blood-soaked, flesh-pealing, naturally cinematic scene, McQueen finds the beauty in torture, the art in tragedy and most of all, the passion of perseverance and hope, despite all. 12 Years A Slave will undoubtedly be one of my favourite films of the year. And rest assured, once its hold loosens and the chains drop, 12 Years A Slave will survive as one of the year’s most memorable stories of hope, and will live on to be a modern American classic.

Impacted and left stunned after seeing McQueen’s new epic? Leave your thoughts and opinions below in our comment section.