There are movies that can be put in a category appropriately labelled ‘Oscar bait’; and if there is one film that exemplifies that best this year, it is The Book Thief. Just like any cold or flu, ‘Oscar bait’ films have very clear symptoms. For starters, setting the film during The Academy Awards’ favourite time in history, World War II is a must; having a young lead performance is another; previous academy award winners and nominees within the cast (in this case the illustrious Geoffrey Rush and the always impressive Emily Watson) always helps; and finally, the icing on the cake is the heavy-handed and manipulating (to the point of distracting) forced drama (in this case, a completely unnecessary voice-over). Put all those factors together and you have one of the most formulaic and familiar films during Oscar season this year. Read more!

I have not had the pleasure to read Markus Zusak‘s supposed enthralling source material in which the film is based off of. The novel has received an overwhelming amount of accolades for presenting a story through the perspective of an unlikely narrator, but within Brian Percival‘s cinematic adaptation, unfortunately, this narration is far from effective.

The Book Thief is by no means a terrible film. Mediocre at best, the film is a slow, long-winded feature that check-marks most of the essential plot-points of its far superior World War II predecessors. With just over a two hour run time, The Book Thief uses morbid images of death, sometimes involving children, to get its dramatized point across and elicit notions of pure sentiment. 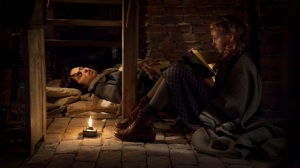 The film follows Liesel Meminger (French-Canadian Sophie Nélisse from Monsieur Lazhar), a newly orphaned child who is in the midst of pre-war Germany in 1938. Liesel is sent to live with a new family, Mr. & Mrs. Hans Hubermann (Rush & Watson) and like any child her age, she is very much reserved towards the strangers she must now call her parents. Hans does everything in his power to comfort his new daughter, finding a common passion in literature. Liesel, who is unable to read before she arrives to her new home on Heaven St., seeks the guidance of her new father, and together they find a small solace amongst the raging political ideology and war propaganda within Germany at the time. As you would expect, Liesel befriends a young, lemon-haired boy Rudy (Nico Liesch), and together the film recounts the innocent relationship these two share during one of the most atrocious times in our world’s history.

The scenes between Rudy and Liesel are some of the best within the film, surely capturing the simplicity of children trying to make sense of a very complex time. The very fabric of the relationships and loyalties between the people she holds dear to her are tested with the sudden arrival of Max (Ben Schnetzer), the son of an old friend of Hans. With cultural tension and war on the rise, Liesel and her family must turn a blind eye to patriotism in favour of humanity, finding a new way to survive without ever compromising their own integrity.

Some of the finer points of The Book Thief comes from its impeccable acting talent. Nélisse embodies the young heart of Liesel and makes the character her own. While Rush and Watson make the best of the material they are given, Rush is always shining, capturing our hearts and the heart of Liesel any which way he can. His affections are as sweet as the lumps of sugar he magically surprises her with.

Light on any real emotional responses, The Book Thief will less than likely make a dent during the award season. It’ll probably be left mostly forgotten by the time nominations come early next year.

Rush is a fine actor joined by an equally talented cast. Despite the great acting unfortunately, The Book Thief will surely be crippled for its cliched war narrative that we have seen time and time again. Applause is surely warranted for choosing to focus on elaborate set pieces, excellent production design, authentic filming locations in Berlin and talented actors, however the film neglects its chance to actually drop any emotional bombs on its audience.

What did you think able The Book Thief? Potential Oscar frontrunner or typical WWII drama? Leave your thoughts and comments below!