The heist film genre is one of the most exciting film genres in recent memory, thanks to the likes of elaborate minds and stylistically driven directors. From Soderbergh’s Ocean trilogy which began the trend of mainstream, modern-day cops-and-robbers films, to other very meticulously crafted caper films, the heist genre is one which is both exciting and compelling to crack before the climactic final act. American Hustle is a modern day, somewhat self-indulgent, patriotic heist film with outstanding performances, many good times and very few bad times. The beauty of Hustle lies in its amazing ability to fake it; whether it be faking an overly complicated narrative for no apparent reason or a meaningful story that never gets old, Hustle is a solid film that will con your heart, through and through.

American Hustle is a testament to a very powerful, respected and hard-working director. David O. Russell is a director who focuses more on his characters than he does on his story, and it is easily noticed in Hustle. Each and every one of the performances in his newest writing/directing credit is every bit as evolved and appreciated as his last. O. Russell has proven, time and time again, that his ability to get the best performances out of his actors is one of his many featured signatures. From Melissa Leo, Amy Adams, Christian Bale, Bradley Cooper, Jacki Weaver, Robert Di Nero, and Jennifer Lawrence, O. Russell brings a furious velocity to his characters in the form of his actors that have ended in Oscar glory, if not recognition, at the very least. 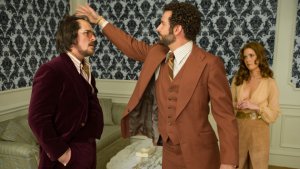 American Hustle is a con film showing the real con-artists as small time players against the biggest con artists of the world; the American government and the American judicial system. Hustle is a loose re-telling of the events following the investigation of the operation named “Abscam”.

Like any good story being told, it begins, and will always begin with a girl. That girl, in this case, is Sydney Prosser (Amy Adams), or Lady Edith Greensly, either way, it starts with a girl, as do most American narratives. When low-level con artist and small-time businessman Irving Rosenfeld meets stripper Sydney at a party in 1978, the two begin a love-affair that involves low-level stakes at fraud and scamming, unbeknownst to Irving’s unstable wife at the time, Rosalyn (Jennifer Lawrence). As Irving and Sydney meet investors and embezzle their money, they attract the attention of undercover FBI agent Richie Di Maso (Bradley Cooper). Desperate to make a name for himself, Di Maso entraps the two con-artists in a scam that includes the mayor of Camden, New Jersey Carmine Polito (Jeremy Renner), various members of Congress, and the mafia.

While Irving’s life spins completely out of control between spiralling cons, a love triangle between him, Sydney, and Richie, as well as his manipulating and out of control wife, Irving must master the fine art of deception so that he and Sydney can still come out with their lives. 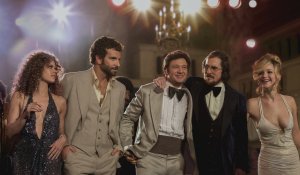 Much like the marketing of the film, and true to the style of the director, the performances are at the forefront of Hustle. Turning in two of the best performances of his career (the other being the slow burning thriller Out of the Furnace) Bale solidifies his confidence as a serious method actor. Bale’s dedication to the craft, whether it be his outrageous weight-gain or loss, heightens his performances.

Other stand-out performances include Amy Adams, whose confused and beguiling depiction of a desperate woman in search of love, happiness, and the American dream, is met wholeheartedly when she delivers lines like “you’re nothing to me until you’re everything”. Adams sheds her good-girl image as she did for O. Russell previously in The Fighter, by playing the sexy pillar to her love interests. Much like Julia Roberts did in Erin Brockovich, I’m not sure if Adams deserves the supporting Oscar nomination or if her constantly revealing side-boob does. Either way, Adams seduces her leading men in high fashion, and ironically enough, low fabric. 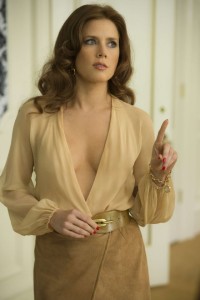 Renner hits it out of the park as Polito, an honest man whose sketchy manoeuvres as a person in power, really sheds the action-hero substitute Renner has been playing recently in franchise revival action genre films.

Cooper gives a great physical performance as he did also in Playbook, but unfortunately falls short and sidelined by Bale’s unwavering performance. Plus, I’m not sure if the tight-curl perm really helped with the believability of his character or if it may have been a tad too distracting to Cooper’s overall performance. 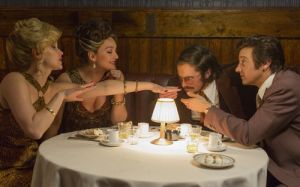 At the end of the day, as Irving states early in the film, “we con everyone, we even con ourselves”. American Hustle is a much needed con of a film of heavy hitting dramas in a hopeful Oscar season. Blending an exhilarating mix of serious comedy and satire, O. Russell preaches some of his many valiant directing efforts by trusting in his highly-skilled actors and allowing them to use improvisation to develop the shape of the films rustic narrative. O. Russell’s characters literally sing their hearts out to ensure the audience understands the subtle points of their deep emotions, and with the help of a highly effective retro-soundtrack to hit some of the confusing plot points.

American Hustle teaches us by its final credits that “necessity is the mother of invention and the art of survival is ongoing”. Everyone hustles, whether it be hustling for respect, truth, love, or the American dream and it becomes clear that O. Russell hustles for Oscar glory. Although 2013 may not be his year for a win due to a very congested roster of quality films, one can only admire the wide variety of character-driven pieces of narrative O. Russell delivers, as well as his ability to never give up entertaining us with actors who really get their characters right, find the light and shine bright.

Now that it’s out, what did you think of American Hustle? Is David O. Russell’s newest feature film a bustling, character-driven piece of American cinema or a low-level hustlin’ flop? Leave your comments below and share your thoughts.