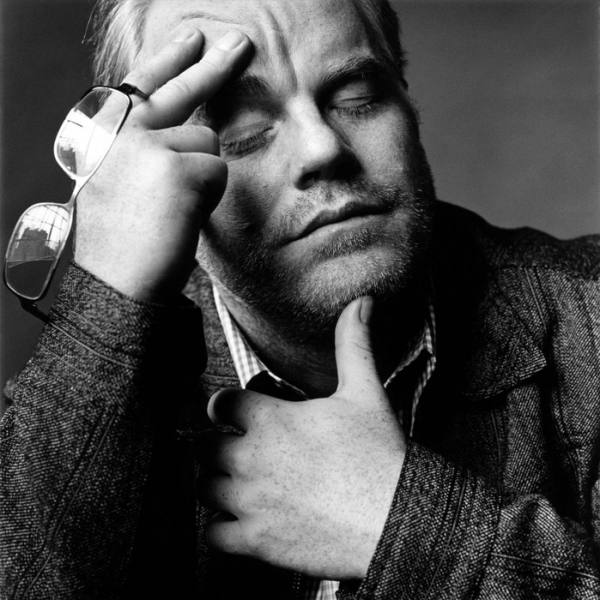 Today is a sad day in the world of movies. Early this afternoon, in his Greenwich Village apartment in New York City, the incredibly diverse and unique character actor Philip Seymour Hoffman, was found dead. The actor, who had been struggling with drug addiction for the majority of his career, was allegedly said to have had a needle in his arm as well as a small envelope nearby that may have contained heroin according to the friend that barged in.The news comes as a great shock to Hollywood as well as the rest of the world.

Hoffman was a momentous actor to say the least. He began his career in the independent film circuit and quickly garnered the attention of actors and directors alike who were all adamant to collaborate with such a fine artist. The actor was recently seen at the Sundance Film Festival promoting two of his films; director Anton Corbijn’s A Most Wanted Man, and Mad Men actor John Slattery’s feature film debut God’s Pocket. In addition to his recent festival run, Hoffman was cast in a crucial role in the Hunger Games film franchise as game designer, Plutarch Heavensbee.

Born with a natural charisma and charm, Hoffman has always been a favourite of ours here at Night Film Reviews and we truly believe that he was one of the few actors who has defined our generation’s place in cinematic history. The actor was a true artist who poured all his emotion, his heart and his soul, into each and every performance–no matter how big or small. Even the most casual of film-goers couldn’t deny his effortless acting present, no matter the role. From Paul Thomas Anderson, a director who prided himself in knowing Hoffman as his most frequent collaborator and muse, to Bennett Miller, who directed Hoffman to Oscar glory in Capote; Hoffman was among many of the reasons we enjoyed going to the movies so much!

Hoffman left us with a legacy of fine acting and performances. His filmography is somewhat of an actor’s wish list, having worked alongside some of the greatest names in film, from Spike Lee, George Clooney, Ryan Gosling, Paul Giamatti, Charlie Kaufman, Ed Norton, Meryl Streep, Tom Hanks, Catherine Kenner, Tom Cruise, Mike Nichols, Bill Nighy, J.J Abrams, and the list goes on.

In light of the recent unfortunate events, we at Night Film Reviews wanted to showcase a list of our favourite performances from one of the greatest actors of our time. Hoffman was an actor who dabbled in comedy, action, drama, art-house, suspense, thriller and mainstream films, never limiting himself to a specific genre or role. Below, is the list of what we consider to be the 10 Best Performances of Philip Seymour Hoffman’s career, a true testament to his diversity. Have fun with the list and be sure to check out the videos for some great clips of Hoffman at work.

10. The Ides of March/Paul Zara

Hoffman loved to get involved in the political, and with the George Clooney-directed feature The Ides of March, not only does he dive into political-thriller territory but also crosses the boundaries into suspense-mystery. This entry will be the first of many entries to really show that, whatever Hoffman did, he was great, often times magnificent. The Ides of March and his role as Paul Zara is just the tip of the iceberg that is the Hoffman acting canon.

There is something so difficult about one specific artist trying to inhibit the abilities and talents of another artist or their artistic expressions. It is very difficult to name many successful actors who have the ability to be successful musicians. Hoffman has no classical music training, yet, his portrayal as second violinist Robert Gelbart in A Late Quartet is an effortless example of physical acting. One of Hoffman’s signature acting traits is his ability to control his body and deliver fantastic physical acting to his roles. With Quartet, his movements and mannerisms resemble those of a classic violinist; embodying the physical movements of the music better than any actor on screen. The film was a hidden gem in 2012 and will hopefully show a side of the actor that many people haven’t seen, one filled with music and life.

In Along Came Polly, after a chance meeting, Ben Stiller falls in love with an old high school acquaintance, Polly Prince (Jennifer Aniston). Throughout his journey of impressing a girl that is far from being his ideal mate, Stiller confides in his washed out, self-absorbed, former child-star friend, Sandy Lyle. Lyle was hysterical and goofy in a way that only Hoffman could be, showing some serious comedic acting chops. For that, we applaud Sandy for allowing us to open up our umbrellas and watch as the drops of tears of laughter scurry down our face.

There was something diabolical about Hoffman that really innovated the current new wave of action films recently from his turn as the baddie in the third Mission Impossible. Davien was an intelligent and a completely unforgiving nemesis to Ethan Hunt. But the fact that the film made the everyday man, also one of Ethan Hunte’s most difficult adversaries, by showing him as overweight and just like any which one of us, showed how the reality of a villain role, no matter how big or small, could apply to anyone. Hoffman tapped into his sinister self and had us gripping the handles of the theatre seats in his portrayal. Thanks to J.J Abrams who decided to cast Hoffman right after his Oscar win as Truman Capote, and paved the way for A-List Oscar winning actors to enjoy and relish being the bad guys. Hoffman made being the bad guy cool again! 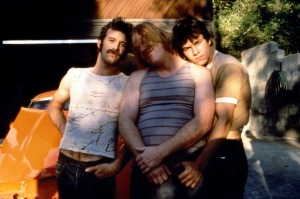 So far we have Hoffman as a politician, former child star, violinists, and bad guy. One role you wouldn’t be so quick to place Hoffman in, is in the world of porn, as gay sound boom operator in love with Mark Wahlberg, but then again, if anyone that could do it, its Hoffman. Alas, Hoffman does what he does best, and makes us believe in the trials and tribulations of the many difficult decisions his character must face. Hoffman is only in the movie for bits at a time, but despite his minimal screen time, he is remembered solely for his amazing acting ability to  submerge us into the pain and suffering his character Scotty faces when he is unable to attain his love.

Throughout his career, Hoffman kind of has his own Denzel Washington “King-Kong ain’t got sh*t on me” moments, and it all begins in Punch-Drunk Love. Somewhat comedic yet somehow a bit tragic, Hoffman treads the fine line of acting with your body, hands and mouth, while somehow always maintaining the attention to his face and eyes. Dean Trumbell is just one of the first fine examples of that talent.

Jacob Elinsky is an insecure, pathetic and often times hypocritical character that never knows what to do and is always following in the footsteps of his friends. Thankfully, this is something that Hoffman never does as an actor and instead becomes the trend-setter for many up-and-coming actors. For Hoffman to allow himself to dive into a role that is all the opposite qualities of his acting personalities and character traits, is something of a new offering for audience members. Elinsky is conflicted and tormented, and we really are able to understand all these insecurities thanks to Hoffman. 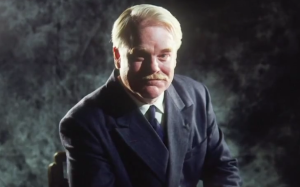 If you haven’t noticed a trend in the various incredible roles in Hoffman’s career, then you don’t have any idea what the basis of his work involves, and that’s loyalty. Hoffman, who worked in almost all of Paul Thomas Anderson’s films as well as with his University film friend and collaborator Bennett Miller, Hoffman is most comfortable with the artists he trusts most. Anderson, as a director, was a hit or miss for me, delivering gems like There Will Be Blood, Punch-Drunk Love and Boogie Nights, and duds like Magnolia and The Master, but his ability to get the best performances from his trusted muse is undeniable. In The Master, it is impossible to ignore the acting talent in Hoffman’s role as certified delusional freak, Lancaster Dodd. An odd ode yet clear mirage of the founder of scientology L. Ron Hubbard, it’s roles like these that elevate Mr.Hoffman into a league of his own. 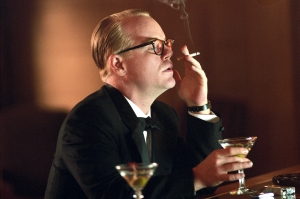 For the most part, this will be the role that many will remember Hoffman for, simply for the fact that he won the Best Actor Oscar for it. The role is one that requires any actor to submerge themselves into the mindset of one of the most misunderstood and mysterious American authors of all time. Hoffman is truly a revelation as Capote. From his voice, to his queer manners and even the way he smokes a cigarette, it is a role Hoffman was born to play. This is a performances that shows the fine elegance and maturity of an actor who works for the passion and love of cinema and grows with each and every role.

Caden Cotard is the apotheosis of Philip Seymour Hoffman; as a man, an actor and a human being. The role is a once in a lifetime performance, filled with improvisation, confusion, interpretation and confidence; many of the personal characteristics of Hoffman. Caden is a sad soul with quite the story to tell, and I cannot think of a role that perfectly encapsulates Hoffman’s life better than Synecdoche, New York. Despite the fact that this is one of my favourite films, it is also one of the best performances of all time from one of the greatest actors of our time. Expect the unexpected and go into the movie knowing that, there is no other living actor that could have delivered this role, which allows it to grab the top spot of the Hoffman roles of all time.

Rest peacefully Philip Seymour Hoffman, you were taken far too soon and you will most definitely be missed! You truly are…a master!