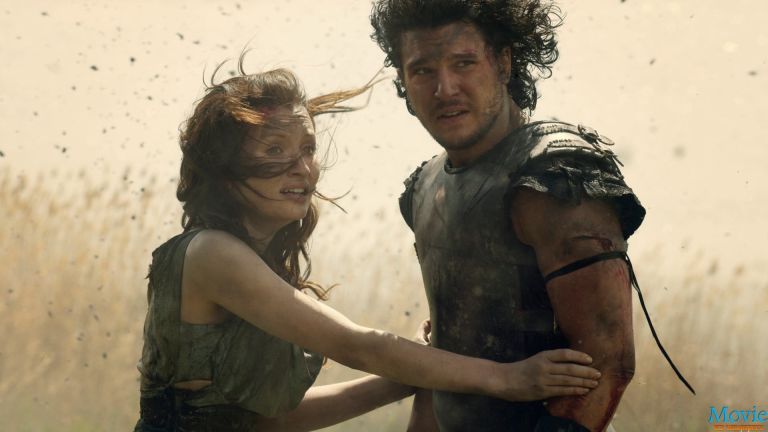 Pompeii is the type of epic disaster movie with a story-line centered on the brief and wholly unrealistic love story of a couple who just barely meets, a type of movie that is typically expected of directer Roland Emmerich (Independence Day, 2012, The Day After Tomorrow, Godzilla). Instead, surprisingly, Pompeii is directed by Resident Evil chief Paul W.S Anderson who visits the ancient Roman town-city with all the expected cliches of the disaster movie format that have become all too predictable. Thankfully, Emmerich hasn’t been able to deliver in a genre that he practically moulded as of recently, and Anderson gives audiences a fine, entertaining specimen of blockbuster proportions, with no shortage of historical inaccuracy.

The beauty about the legacy of the ancient Roman city, for Anderson at least, is that there has yet to be any sort of blockbuster feature film centered on it. Pompeii, a small port city which is located not too far from the base of Mount Vesuvius, experienced an eruption in or around 79 AD. The catastrophic eruption destroyed the city of Pompeii, as well as the surrounding cities including Herculaneum. However, unlike it’s cinematic interpretation, most of the people who died from the eruption did not suffer from flying lava bullets, tidal waves due to shifts in the Earth’s crust, or large holes in the street; rather, they died from extreme heat and suffocation as a result of the ash clouds. But we all know no one wants to see a movie where people just drop to the street and die. That’s what happened in The Happening, and no one wants to see that again, even if it is set against the amazing city of Pompeii.

The truth remains, Pompeii is a large scale, slave-centered, disaster epic with hints of Gladiator and 300 all rolled into an ‘end of the world’ narrative. For the most part, the film is a satisfying display of Hollywood’s fascination with artificially sweetening historical events, making them grandiose and affecting. Like any good looming disaster, there is always hope for love, redemption and justice, which is exactly what Pompeii sets out to achieve.

Thanks to the success of 300 and audiences’ obsession with fetishizing male bodies, no film set anytime in the ancient period, can have an actor show up on screen without a picture perfect set of washboard abs–an ingenious way to bring young and old female fare to the theatres. You gotta love multi-million dollar Hollywood marketing strategies. This time, the lucky stud to completely transform his body (if only temporarily) is Game of Thrones actor Kit Harington.

The film follows the constantly oiled up and über muscular gladiator Milo (Harington). Milo is happily born and raised in a small village belonging to the Celtic Horsemen Creed until one cold night when Corvus (Kiefer Sutherland), a senator under Titus and his Roman regime, comes and rips away everything Milo had come to know including his family, simply for the lust of land and rule. Lost and left for dead, Milo is thrust into slavery and raised among gladiators. Along with a vow to take revenge on Corvus, he grows up to be a lean, mean, gladiator-ific fighting machine. Almost two decades later, Milo’s amazing skills are noticed by a Pompeii aristocrat and gladiator recruit Graecus (Joe Pingue) and Milo is sent to Pompeii, where he meets and falls in love with the princess of the land, Cassia (Emily Browning). Unbeknownst to the inhabitants of Pompeii, something disastrous is brewing high inside the mountain leering down on them, ready to deliver a fate that quickly becomes a highly spectacle yet doomed story of honour, family, and love.

I am sure that there were many reasons why Anderson took on this project, especially since he is infamous for forcefully introducing 3D into his productions. His constant need for including the over-used movie gimmick is more than enough reason to revive pretty much anything, like Spider-Man for example. But, for the first time in a film made just for 3D, Pompeii surprisingly uses the fancy tool to it’s advantage and at times becomes almost unnoticeable, which is something that I haven’t really experienced during a film, especially one I wasn’t anticipating much from.

Although the film’s exterior focuses on Mt. Vesuvius and the destruction it is patiently planning, the heart and soul of the film seems to be centered on Harington and co-star Adewale Akinnuoye-Agbaje. Never have I seen a film where the two leads bond so much over the discussion of how they plan to kill one another. Sworn to be enemies and destined to fight to the death, the two men also happen to share the same cell, which kind of takes away from the imminent threat of death. But just like anything mass produced and destined for redemption, the two begin a friendship that sees them saving each other’s lives countless time; defying Rome and Corvus as well as giving one another a chance at retribution. The scenes between Harington and Agbaje are easily the best in the film as well as the most engaging. 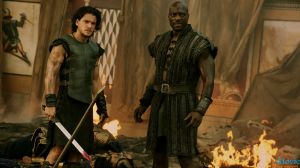 Pompeii is populated with a rather impressive cast, starting with it’s lead Harington, who like most fragile warriors doesn’t speak much yet is still able to get his point across whether in or out of the arena. Harington brings a nice vulnerability to his character and the soft glare in his eyes really shows a peaceful warrior side that most gladiators in other films never fully appreciate. While on the topic of gentle giants, no better term could be used to describe Agbaje, a starkly strong character actor who brings a certain gentleness and charm to his role as well, but one that is not to be mistaken for weakness.

Browning does a refreshing job as Cassia, a princess who rather than taking the typical role of a woman controlled by her male superiors, dominates the screen as a female who takes action over passiveness. It is nice to see the talented Browning in a big-budgeted film as a princess in need of saving, rather than her recent bout as a kick-ass heroine. 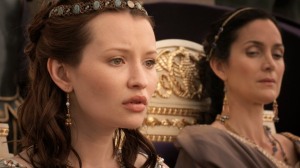 The cast is rounded out quite nicely by the always amazing presence and incredibly menacing voice of Kiefer Sutherland. It has been a while since I have actually seen an actor have as much fun with a role as Sutherland does with Corvus, a man hellbent on domination, control and power. His overly dramatic hand gestures and monologues are some of the over-the-top moments of the film, but never tread the line of cheesiness. In addition to these many talents; Jared Harris (Sherlock Holmes: A Game of Shadows), Carrie-Anne Moss (The Matrix), and the underused Jessica Lucas (Cloverfield), all add a very real dimension to Anderson’s sweeping and doomed spectacle–despite some of their questionable British accents. 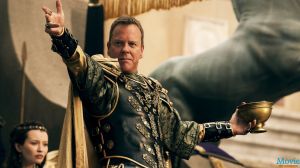 For the first time in a while, Hollywood has adapted a story for a blockbuster film many people already know the ending too. With a little research and some interest, the history and tragedy of Pompeii was just waiting to get a big screen adaptation. Anderson may not have been my first choice to helm the film given his previous directing efforts, but surprisingly he is able to bring this large February jewel to life in tasteful fashion. February movies are all about having fun among a month of commercial love and January holdover films. Pompeii is a sword-wielding tale of political corruption, gladiator fights, deep temptations, and the ultimate story of survival that is about as entertaining and fun as you’ll get at the movies at this time of year, just don’t use it as historical credentials!

What did you think? Horrible Hollywood fare or entertaining 3D spectacle? Was Pompeii really that bad or better than you expected? Leave your comments, thoughts, and voice below!