In a world according to Paradise Now director Hany Abu-Assad, death, murder and revolt is currently a right of passage to manhood and way of life in the West Bank. Hearts-pounding, sweat dripping, pulses racing; three friends and militants affiliated with the Aksa Martyrs Brigades find themselves organizing a sniper attack on an Israeli Military post that will find their friendships, loyalties and lives changed forever.

Omar is the name of the film and is also the name of our main protagonist (Adam Bakri) one of the three friends whose sensitivity, loyalty, passion for life, and love of the cause are unflinching. Omar is a Palestinian living in the West Bank who, like most, are subjected to an intolerable amount of injustice and mistreatment as anyone else currently living in the West Bank from the Israeli Defence Force. The location of the West Bank, has just as much if not more to say itself than the film in question, but for the sake of the flow of this review, let’s not get into a discussion of history. Taut, riveting and desperate, Omar is a suspenseful film in constant pursuit of truth.

Omar is a freedom fighter, led by his childhood friend and best buddy Tarek (Iyad Hoorani), and joined by their younger, marshmallowy and goofy friend Amjad (Samer Bisharat). The three friends plan out a violent and extremely dangerous mission to help the Palestinian cause. Although their efforts are valiant, essentially, they become killers.  Omar tells a story of one man’s life in the grande scheme of things and in the on-going battle between Jews and Arabs for a Holy Land; a land who’s soil is drenched with the bloody memories of the lives once lived.

Part high-tension chase film, part intricate prison/interrogation drama, Omar could easily be confused with a political-thriller that would and could be directed by Paul Greengrass (Captain Phillips); thanks to the film’s effortless ability to share many of the same idealistic political views of its people, its military, its innocent and its guilty. Throughout the film, it seems that Omar is the only one in the group getting hassled, arrested and tortured, until, he mistakenly confesses about the sniper shooting to the officer in charge of him Rami (Waleed Zuaiter). As a Palestinian freedom fighter, Omar is reminded over and over again that there is nothing worse than collaborating with Jews, not even death. After facing countless attacks within the prison, being accused of treason and as collaborating with Jews, Omar’s greatest challenge is to convince his peers, fellow patriots, the love of his life Nadia (Leem Lubany), as well as himself of the choices and actions he must make to clear his name and garner the trust that seems far from reach.

As the plot of the film progresses, Omar, a once simple baker working outside the West Bank, daydreaming of a Honeymoon with his girlfriend and hopeful wife Nadia, becomes a conspirator of each person around him and their elaborate plans against the opposition. Omar climbs the wall that divides his worlds so that he may exchange simple love letters with Nadia as they try to plan their future together, a future that soon becomes thwarted by a Defense Force that will do anything to get Tarek, even if it means crumbling Omar’s world. The film quickly progresses to a spellbinding and exhausting flee of terror from authorities and so many questionable ideals which each side exhibits. 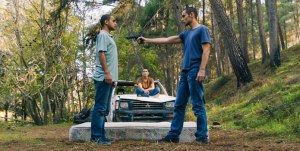 Filmmaker Abu-Assad, who was born in Nazareth, and is no stranger to the dangers of life in the West Bank, uses Omar and his fine skills as a director to catch up and keep pace with the athletic, constantly in-pursuit protagonist. Beaten, bruised, bloodied and broken, Omar represents a proud and very real population of Arab people. Between discreet close-up panning shots, to questionable editing and pacing, the film seems almost documentary-esque. Thankfully, Abu-Assad handles the film gracefully and unbiased, presenting the very real terrors endured by either side.

Omar then becomes a film that allows anyone, including audiences, to “believe the unbelievable”, even if the final ending feels forced, and completely unexpected. Perhaps, that’s the point though. Like any good hunter, the best way to lure one’s prey, is to entice them with the promise of nourishment (in our case knowledge) without consequence. Omar teases us with this, and then quickly rips it away, giving us only confusion and questions unanswered. Only few things remain once the screen fades to black, and one of them is the reality of the people living through hardship and the far-fetched promise of change. The other promise Omar leaves us with is the promise of the power of love–whether that love be the love of a woman, the love of family, the power and love of friendship or love of country, the choice is up to you.

What did you think of Omar? Was it able to accurately illustrate the struggle happening today in the West Bank?  Is it entertaining, dry, or just plain uninteresting? Leave your comments and voice below!