The future sure has been quite a time for Captain America (Chris Evans). His first encounter with the modern world saw him running through Times Square, confused and scared. Next, he assembled with some other Superheroes to save the world from the disgruntled brother of a fellow Avenger. In Captain America: The Winter Soldier, Cap faces off against an internal threat and an organization that is just as powerful as S.H.I.E.L.D, as well as a familiar face and new adversary from his past. Life is rough for Cap. On top of everything, he is still trying to find a way to successfully assimilate himself into present day society. You think saving the world is hard? Try figuring out the internet, getting back on the dating scene, and making new friends at the age of ninety-five. Thankfully, there are only a few things Cap needs to get through the day; his trusty vibranium shield and his handy notepad with a slew of suggestions for catching up with the last seventy years, and Cap is ready to take on the world–or corrupt government organizations. Either or, Cap is always ready to save the day, even if he has to take a beating while doing it.

When I first became aware that the directing/producing brothers behind episodes of  ‘Community’ and You, Me and Dupree were going to be responsible for  extending the Captain America canon, I may have gotten a little worried. Thinking that Joe and Anthony Russo were going to follow in the same footsteps as Captain America: The First Avenger director Joe Johnson, focusing more on the comedy and special effects of the Superhero genre and less with the complex, unflinching patriotic mentality of America’s greatest super soldier, the Russo brothers sure proved me wrong. It’s movies like these that make happy to swallow my words and stand corrected, knowing that audience members are able trust that the television medium is one that can be used as an adequate platform towards advancing characters in film as well. 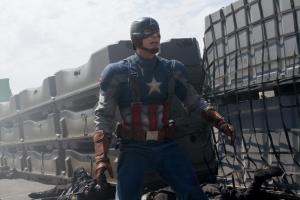 Substituting as much VFX work as possible for a very organic and old-school action approach, Captain America: The Winter Soldier is certainly the best Phase Two Marvel film so far, and may perhaps be the standard film to compete against in a post-Avengers film world, or at least up until the Avengers: Age of Ultron.

Always on a mission, it seems that Cap lives to work, not works to live. Especially since he has been in deep sleep for the last little while. While the United States government is surely getting the most out of their ridiculously expensive investment, the government trusts that their super solider is never compromised and his dedication and hard work to his country is never skewed. When a secret organization with similar interests to those of S.H.I.E.L.D threaten to kill twenty million people, Cap is sent to fight at sea, on land, and in the air. Accompanied by his trusty sidekick Natasha Romanoff/Black Widow (Scarlett Johansson), the two seem to always be pitted within the same missions but always having ulterior motives. Commanded by their one-eyed superior Nick Fury (Samuel L. Jackson), S.H.I.E.L.D must face off against their most ruthless enemy yet. 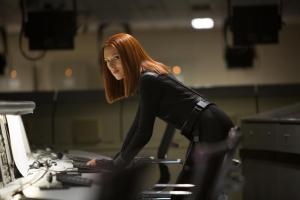 One of the biggest issues I will continue to have with Marvel’s stand-alone films from now on, is the fact that once conflict reaches a certain level of danger, like lets say a global level, I will always ask, “Where the heck are the Avengers? And if not the Avengers, where is Tony Stark? The Hulk? Someone? Anyone?” No problem could be too big for the super-powered team of freedom fighting Superheroes. This is one film where I questioned the presence of Tony Stark? Was he just waiting to see what Cap would do on the other side of the country while he sat at home on his couch?

Essentially, Captain America: The Winter Soldier is a team effort in crime fighting, with Black Widow and Sam Wilson/The Falcon (Anthony Mackie) helping out are star-spangled Superhero this time around, Cap sure doesn’t seem to be without powerful friends. What was also refreshing was finally seeing Nick Fury get in on the action, providing the film with one of the best car chase scene Marvel ever assembled. One of the virtues of Captain America: The Winter Soldier stands by is the fact that, you don’t need to wear a mask to be a Superhero–which might explain why Cap always insists on removing his.

At times, the film may seem like Marvel’s take on Minority Report anticipating danger before it even happens, and upholding the idea of ‘peace’ for the sake of the world. But as the Head of S.H.I.E.L.D operations ironically points out, “peace is not an achievement, its a responsibility”. So when S.H.I.E.L.D is corrupted from the inside, right under their noses and Cap is left to face-off against a super-soldier baddie, later known as the Winter Soldier (Sebastian Stan), the organization really has some explaining to do. The Winter Soldier, developed and equipped with the same agility as Cap, with of course the addition of a metal arm, the masked soldier gives Cap a run for his money. The only person the Winter Soldier ever seems to have any trouble fighting is Romanoff, which raises the question, why doesn’t anyone give her the serum to make her a super-soldier? She would surely kick some serious ass! 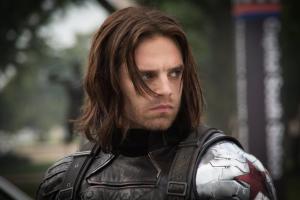 In this entry of the red, white and blue super-soldier, we are submerged into the S.H.I.E.L.D organization a little more and climb up the power ladder to meet Nick Fury’s boss, Head of Operations Alexander Pierce (Robert Redford) as well as personal bodyguard to Cap and resident organization hottie Agent 13/Sharon Carter (Emily VanCamp), and S.H.I.E.L.D counter terrorism S.T.R.I.K.E leader Brock Rumlow/Crossbones (Frank Grillo). In addition to the many other familiar faces, including Toby Jones, Hayley Atwell and Maximilano Hernández, the Marvel Univserse is surely filling up fast. This may be a good thing, or bad thing for audience members, who will surely be daunted with the tasks of remembering who from where, what from when, and so on.

Just recently, Marvel announced that Sebastian Stan, the main antagonist in the newest Cap film, has been signed to a whopping nine picture deal, as well as saying that they have films lined up until about 2028. Since 2008’s Iron Man, the official launch of the cinematic Marvel Universe, there has been nine entries of Avengers-centric films in only six years. This does not include Marvel’s involvement in other high-profile characters, including X-Men, the Fantastic Four, and of course Spider-Man. So how many more films can we anticipate from now until 2028? And is the age of nuanced summer cinema dead and replaced by loud, fantastic comic book saviours?

The action in the newest Captain America film is surely one of its highlights, with the exception of the unnecessary, money grabbing use of 3D. All of the heroes in the films seem to be quite comfortable donning their world-saving costumes for an extended period of time, having as much fun making the film as the audience members watching the film. The Russo Brothers, as well as the actors, insisted on doing as many of their own stunts and performing most of the action themselves. Which gives a real authenticity to the spectacle aspect of the film. Just be sure to throw discretion out the window. The age of subtle summer blockbusters will surely be drowned out by sequels of a vast Marvel character vault.

Marvel may be one of the most clever production companies of the twenty-first century. Waiting for post-credits scenes, and post-post-credits scenes that do a wonderful job of building up anticipation for the next entry in the Marvel universe have become a bit of a tradition. Not only that, think of it as narrative-driven, built in movie clips that not only tease the next chapter, but also serve as important marketing strategies for Marvel’s upcoming films. My only question remains, when will people actually get tired of superheroes and caped crusaders enough for it not to be profitable? Will Marvel ever lose money making a film too far in the future where they have saturated out all the interest of their audiences? Or are we preparing ourselves for a society of visually hungry moviegoers born on heavy action, artificially created human beings and bad guys from different worlds and beyond the stars? 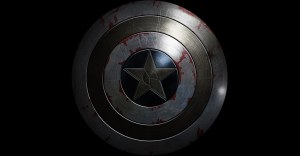 There is no lack of fun or interest in Captain America: The Winter Soldier. Constantly engaging and edited to keep audiences entertained, Captain America’s newest entry is a transcendent cinematic movie going experience. So what if mystery and foreshadowing is left at the door. Marvel aims to please, and even beyond that, they aim to make money. Their second Phase Two film will surely do that, with actor Chris Evans who has mentally and physically embraced the role with grace and ease as Captain Steve Rogers–the image of an everyday man doing extraordinary things. Captain America: The Winter Soldier is a loud, vibratory throwback political action thriller with pulses of fresh life reminiscent to the acclaimed political spy thrillers of the seventies.

Nick Fury suggests throughout the film that “you need to keep BOTH eyes open“, and with Captain America : The Winter Soldier it will be hard not to keep audience members enthralled in one of the best Marvel Superhero films to date. It may have taken one film and an ensemble film for Cap to gain some traction, but with the Russo Brothers responsible for putting together the third appearance of Captain America following the next Avengers film, I have no doubt this time that the brothers will soldier on with their glorious vision of a superhero no one ever really cared for. As a top secret character says in the post-credit scene, “This isn’t the age of spies. This is not even the age of heroes”, it’s the age of Marvel, and Captain American: The Winter Soldier is proof.

Captain America: The Winter Soldier is finally here! Does it bring all the ingredients needed for a successful Marvel film? Is it better than the first one? Is it better than The Avengers? What do you look forward to in the next chapter of Cap? Leave all your geek-centric thoughts below!

Here is the last trailer Marvel studios put out from Captain America: The Winter Soldier.