If the new Spider-Man could represent one thing, it would be hope; hope that Sony can deliver as Disney and Paramount Pictures have with its Marvel mammoth The Avengers cannon; hope that their reboot is a successful and advancing platform towards a very large and lucratively sinister franchise future; and hope that will restore faith in the amazingness in its highly popular comic book wall-crawling character after a trilogy not too long ago.

Spider-Man is undoubtedly a symbol of hope; a beacon of goodness; an ideal for morality. Growing up, Spider-Man was and continues to be one of my favourite comic book characters. Riding on emotion and sentiment, the web head is a fictional comic book character written as imperfectly as you and me.

Making his fifth entry on the big screen in just twelve years in Marc Webb’s second installment of the Amazing Spider-Man series, The Amazing Spider-Man 2 is less amazing and more routine. At times, the film shines as a gemstone indie love story similar to Webb’s Sundance breakout hit 500 Days of Summer, then, just seconds later, becomes a highly explosive and cartoonish PG suitable Transformers imitation. The Amazing Spider-Man 2 is as confused a film as its lead human character Peter Parker, taking too many liberties with his story yet trying to stay true to the comic book character Stan Lee and Steve Ditko created over fifty years ago. Thankfully, actor Andrew Garfield suits up again and holds the emotional scenes of the film together as the wise-cracking identity confused teenager, nailing every subtle and bold Peter Parker nuance while facing off against many obstacles and three very pissed off villains in what has been marketed as ‘his greatest battle yet’.

With the exception of Sam Raimi’s Spider-Man 3, the last of Raimi’s trilogy with the character and a total train wreck, the films seem to be making a slow but steady decline in narrative, quality filmmaking and heart–and the same could be said with The Amazing Spider-Man 2. Rebooting the series in 2012 for the sole purpose of making great use of movie theatres current obsession of 3D and applying it to Spidey’s first person metropolitan web-swinging, the point-of-view filming approach makes up for mere minutes of the film, usually focusing on the tormented personality of Peter Parker and the difficult choices he needs to make, as both a man and a hero, which was already visited in the first trilogy. Not that we are expecting a film to be made in the same way as the disastrous POV bomb Doom, but if the studio did decide to revisit a highly successful series only years after the first one was complete, at least make it worth while for the audience to drop the $20 for admission.

In the first Amazing Spider-Man film, Webb’s narrative felt like a familiar story of Peter Parker with a new villain. Thankfully, the series was able to pick up massive talent with a director who flourishes in his ability to flesh out the fine chemistry between his actors as seen with 500 Days of Summer and is able to create highly emotional, gut-wrenching bonds between lovers, friends, allies and enemies. With the talented Mr.Webb behind the lens, the Amazing franchise brought Peter Parker more vividly to life with the passionate and caring Andrew Garfield, who proved on many occasions how humbled and dedicated he was highlighting a side of Peter Parker in a way that Tobey Maguire never could. His interactions with his aunt and love interests Gwen are the best scenes in the film, hands down. Kudos to Ms. Emma Stone, who brings Peter Parker’s first love Gwen Stacy to life with pizzazz and spunk for a second time and finally rids herself of all the Emma Stone nuances that made her performance distracting in the first film. 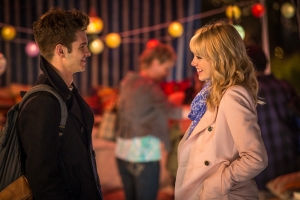 Picking up exactly where the last film left off in terms of secrets and mysteries, the film opens up to a flashback of Peter Parker’s parent’s disappearance. Richard and Mary Parker (Campbell Scott and Embeth Davidtz) leave New York and their son behind after double-crossing Oscorp. Flash forward nearly two decades and their son is saving the big apple in his blue and red spandex suit, one fallen fruit at a time.

One of the most interesting mythos behind Spider-Man is his bond with humanity and his internal struggle. Spider-Man is cocky and comical throughout the film, usually minimizing the severity of the action and violence going on around him. Meanwhile, Peter Parker is a highly emotional and tragic character whose curse lays in his inability to distance himself from the people he loves the most. Spider-Man narratives have always been about making choices, choosing paths and learning from one’s mistakes. Almost all the comic book characters getting the big screen treatment have been adapting what I like to call The Dark Knight formula; a formula that allows its characters to somewhat be rooted in reality, adding a drizzle of grittiness. Spider-Man seems to be one of the few, if not only, comic book character on the silver screen today who maintains his childish, goofy and often times overly-comical approach, adding colourful hints of appropriate teenage-ness. Sadly, unlike many other famous comic book characters, Spidey’s world is one that is conquered constantly by the death of others, a theme that is in no way easy to swallow for children or teenagers–making the film a topsy-turvy tonal mess.

One of the biggest question marks in this film was whether Gwen would make it out alive or not. Webb’s film franchise introduced Gwen and allows Gwen Stacy (Emma Stone) to be the sole love interest in Peter Parker’s life. Absent of the infamous redhead Mary Jane Watson for a full two movies, fans of the series, knowing the sad fate of Gwen, wait until the final frames of the film to see what director Marc Webb does with this beloved comic book character.

In the newest installment of our friendly neighbourhood insect hero, the film has taken many of its own liberties with a comic book character we know and love. Norman Osborne (Chris Cooper) who eventually becomes the Green Goblin in the comics, the pinnacle archnemesis to Spider-Man, is only in the film for a fragile few minutes while his son Harry (the incredibly talented Dane DeHaan) is slingshot into the series with very little back-story. So much of the storyline of Webb’s film feels rushed and poorly constructed, especially given that Spider-Man is one of the most widely known comic book stories in the comic universe.

One of the biggest issues with The Amazing Spider-Man 2 is the drive of its villains. In the beginning of the first trailer of the film, Peter narrates, ‘Everyday, I wake up knowing that the more people I try to save, the more enemies I will make.’ As depicted in the comics or film, there is no injustice or crime too big or too small for Spider-Man, whether it be saving a cat from a tree, rescuing a boy being bullied, saving people from a fire or facing off against Electro (Jamie Foxx), Spider-Man will always try to save the day. Unfortunately, Electro is depicted as a severe sociopath and suffers from extreme disillusions lacking human interaction and friendship. The moment he sees Spider-Man’s face flood every screen in Times Square, he decides to become Spider-Man’s enemy. This should not warrant a noble adversary, but unfortunately does in this film. Neither does being arrested during the commission of a crime, as Aleksei Sytsevich, who later becomes the Rhino (Paul Giamatti), or wanting Spider-Man’s blood to save your own life. If such small acts of justice were the catalyst to criminal insanity, then every bully or petty criminal being stumped by Spider-Man would grow into adults, hell-bent on revenge and vengeance (hint: The Sinister Six). The Amazing Spider-Man 2 stumbles and falls in the villain department, making its greatest villain, as seen in Raimi’s 3, overindulgence.

If there is anything director Marc Webb should learn, it should be not to make the same mistakes as those who have gone before him. Like so many other comic book characters, Spider-Man is one with a very deep history and large array of baddies. From the first two Raimi films to Webb’s first Spider encounter, the success of Spider-Man occurred less when facing off against villains, but more facing off against the demons he created for himself. The strength and freedom of the Spider-Man series will surely be tried and tested, since the announcement of a Sinister Six film and a Venom spin-off has been green lit for the near future.

The summer blockbuster season will soon be an arena of comic book heroes, foes, spin-offs and tie ins that will surely exhaust its audience sooner rather than later. Infusing so many of the clichéd tropes of the summer popcorn flick, The Amazing Spider-Man 2 is a goofy and constantly comical film whose power lies in its prowess to connect and relate to the real world problems we all face growing up as we becoming adults. The most powerful scenes of the film, comical or not, are between Peter and his Aunt May (Sally Field) or Peter and Gwen (Stone), without the Spidey mask. The flashiness of the videogame-esque CGI or the triumphantly noticeable sports anthems thundering its audience during action sequences attest to the fact that summer movie season is in session, and it might be a long summer.

The Amazing Spider-Man 2 has a hard time taking flight as easily as Webb’s first attempt with the wall-crawler or the first two in Raimi’s series. Trying to adopt a ‘nothing is what I thought it was’ mystery approach to the film, the final frames of Webb’s film were exactly what I knew it would be. Heavy on computer-generated images that could easily be mistaken for a video game, my favourite addition to Webb’s vision of the wall crawler remains his inclusion of real-life people making a real life presence in the colourful world of comic book characters. Between a proud father/crane operator that helps Spidey get to his adversary in the first film, to one of the bravest kid’s Spidey has ever met in this addition, Webb is a master of human interactions, and should focus on spinning a detailed web that could help save the next installment of our friendly neighbourhood wall crawler. Webb has the great power to create a Spider-Man that is exceptional, unfortunately, with the demands of studios and the plans of future franchises, Webb relinquishes his power for a strong studio responsibility. If only Webb stuck to his guns and listened to Uncle Ben, lets just hope he does if he decides to take a third spin with our favourite web head.

What did you think of The Amazing Spider-Man 2? Great addition to the reboot or a shattered web unable to hold any traction for future plans involving the web head? Happy with the casting? Excited for the future of the most popular comic book character? Leave all your comments and thoughts below!