Death is undoubtedly the strongest motif in Seth MacFarlane’s newest live-action feature film A Million Ways To Die In the West. And like the motif itself, one cannot help but be bored to death with a film, that started off as an inside joke between friends (MacFarlane as well as his co-writers Alec Sulkin and Wellesley Wild), and develops into a perfectly displayed example of what happens when people who have too much money are given the freedom to make any piece of cow dung they want.

If you are wondering just how and why A Million Ways was made in the first place, take this into consideration; MacFarlane’s first live-action feature, a film set-around a fouled mouth, prostitute loving teddy bear, only cost the studio $50 Million dollars and sought in about $550 Million, excluding profitable marketing and merchandising. A Million Ways has a production budget of about $40 Million, and will surely either recoup its budget completely, or draw in massive crowds for a pleasing profit. Seems like the wild west isn’t the only west with some issues. Western society is getting more and more involved with money making ideas than with any artistic ideas of merit at all, and because of that, our canon of comedy is suffering greatly for it. I can only imagine what our grandchildren and great-grandchildren will say when they see mere minutes of this and compare it to the classic masterful parodies before this like Blazing Saddles. 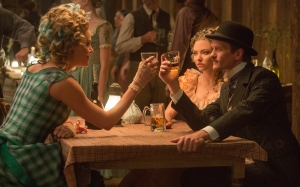 To say that MacFarlane’s A Million Ways is bad is giving it a compliment. Watching A Million Ways only once and being able to it endure it for the one time, is like watching the dumbest person you can image hitting a loved one unnecessarily for an extended period of time, and calling it comedy. Mixing in messy slapstick, vulgarity, violence, gore, animation and unrefined sexuality and sexually innuendoed jokes, MacFarlane better snuggle up and be comfortable beside his teddy bear for the sequel of his surprise summer hit Ted, cause A Millions Ways is worse than having monsters coming out from under your bed.

Like any good parody, the story begins similar to any other cliched generic story of a specific genre, in this instance, a Western centred around a poor sheep farmer Albert Stark (MacFarlane) and his inability to assimilate himself into the life of the frontier. Unable to grasp his hand or head around guns or gunfighting, MacFarlane writes himself as the lead protagonist with much knowledge and immense wit of today’s society, comparing it to the ridiculousness of the wild west. Albert, who avoids confrontation at all costs, backs-out from duels forcing his girlfriend Louise (Amanda Seyfried) to leave him for a wealthier and more macho man in town, Foy (ironically, Neil Patrick Harris). Depressed, lonely and unable to shake the feelings he has with his ex-girlfriend, Albert tries to find sanity and logic from his best friends and couple, devoted Christian Edward (Giovani Ribisi) and his prostituting girlfriend Ruth (the always hysterical Sarah Silverman). Albert, ready to give up, stumbles into the saloon one night and fatefully helps a beautiful Anna (Charlize Theron) escape a dangerous situation. As the two begin to bond over gun totting and a mutual hate of the wild west, Albert’s world is about to get shattered as his newest relationship finds him at the open end of Anna’s husband’s gun, a gun belonging to the notorious and deadly Clinch Leatherwood (Liam Neeson).

Just a few days ago, I mistakenly found myself watching a video online on the lost art of visual comedy. The video, which highlights the steps and excellent examples of visual comedy using the very small yet extremely talented filmography of Edgar Wright (Hot Fuzz, Shuan of the Dead), reminded me how little visual comedy actually occurs in mega blockbuster comedies today. Jokes, actors, dialogue and sometimes stories are hardly the problem. Usually, the problem with so many of these polished and generic comedies is their dependence on the script and the focus of whats said and not what is happening. We are slowly approaching a point in our comedic pallet where the use of sound and picture is just a forum for actors to deliver jokes; think scenic stand up with props. A Million Ways may easily falls under this category (with the exception of a dangling sheep, or the drinking and riding scenes, which may very well be my favourite parts of the film). Staging is forgotten and thrown out the window (as are countless characters in the film) and what remains is a present mentality and hopeful comedic look at the outrageousness of the wild west. But, like any previous civilizations, there’s always bound to be unexplained and comedic understandings as to why people did what they did then. MacFarlane’s attempt to understand the wild west and make it a gross out, rude, crude and obscene comedy, just might inspire someone one day to make a comedy of people today, and their obsession with their phones and technology. Oh that’s right, they already did, its called her, too bad MacFarlane didn’t take any notes.

A Million Ways can best be described as lightly edited improvisation gone wrong.

It baffles me how and why MacFarlane is able to round out a cast as talented and versatile as he does. Sadly, so much of the industry is devoted and based on favours. So when a predominant A-Lister is shooting a Western a couple miles down the street already dressed in-costume, it doesn’t hurt to have Charlize Theron make a phone call and summoned you over. MacFarlane has been fortune enough to work with some talented actors in the past through Family Guy or other endeavours, and it shows that he never forgot them.

Luckily for MacFarlane, Ted was such a massive hit that now MacFarlane is able to do anything he wants, and get away with it, as long as the studio makes their money back. A Million Ways is easily the worst movie of 2014 thus far and will surely be making an appearance a-top my list of the worst films of the year. MacFarlane succeeds at only one thing, and highlights it remarkably in his poorly constructed western-parody, and that is his amazing ability to round out a slew of diverse cameos that no one saw coming. Other than that, A Million Ways To Die In The West forgot another way one could die in the western frontier that wasn’t included in their poorly constructed marketing scheme, and thats boredom. A Million Ways To Die In The West is the ideal example of a film one could actually die of boredom from, so beware, because their are no warning stickers on this flick.

Was A Million Ways To Die In the West the worst film of the year or comedic genius? Was Ted any better? Will MacFarlane ever go back to Parody territory? Leave all your comments, thoughts and remarks below and let us know what you thought of the film.