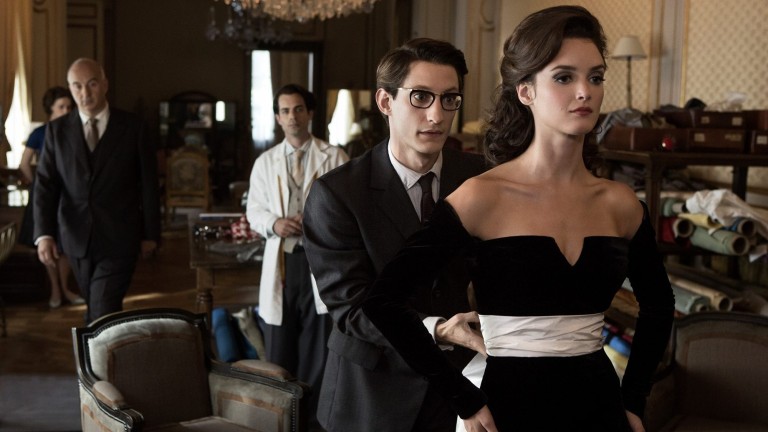 Becoming a trend-setter in the fashion industry can be quite the challenge, but making a fashion movie with some cinematic and historical merit is the real challenge many have been willing to accept, and have failed miserably. Even though there are so many irreplaceable names within fashion with such interesting stories to tell (Dior, Arden, Versace, Ford, Varvatos, Gucci and Chanel to name a few), director Jalil Lespert chooses Yves Saint Laurent; one of the few fashion icons to have his pieces of high fashion and considerably iconic art pieces displayed in museums and prestigious art galleries around the world. Yet, with Yves Saint Laurent, we aren’t quite sure if that is simply enough for a biopic of this stature.

Lacking any real panache and coming undone at the poorly constructed narrative seams, Yves Saint Laurent becomes a retro-fitted cinematic mess that, similar to many of Luarent’s pieces, is more fun to look at than to wear, or in this case, follow narratively. Yves Saint Laurent depicts the tormented life of a genius, torn apart by the luxuries of high living and fame at too young an age. While Laurent could never possibly be taken away from being a visionary, his newest film by veteran French actor Jalil Lespert focuses more on its grainy, melancholic exterior than it does with coherently telling the story of one of the most revolutionary haute couture designers of the mid-1900’s.

One of Lespert’s greatest facilitators of telling Laurent’s story is sex, and his story begins at the tender age of a twenty-one when Yves Henri Donat Mathieu-Saint-Laurent (Pierre Niney) was simply the assistant to Christian Dior. Lespert’s film is a daunting task of understanding the ambiguity of silence and the mixed feelings of Laurent, who makes advances to his female friend and model Victoire Doutreleau (Charlotte Le Bon), yet exchanges undressing glares to his Algerian male gardener–this introduction of the film really throws audiences off. Thankfully, the slight glimmer of brilliance that is Lespert’s film is understood fully once it is revealed that Laurent is a homosexual, and falls in love with Pierre Bergé (Guillaume Gallienne) in a seamlessly idyllic visit to a friend’s Northern villa. Although Laurent’s marriage to Bergé is never seen on film, rather, the tyrannical disputes of power within Laurent’s fashion empire and the constant sexual espionage between the couple is used to replace some of the fluffy, real life moments between the couple, the real life Bergé applauded the film for being a rather authentic look of the life of he and his questionable true love. It’s too bad Lespert’s film is ruined with an annoying voice-over narration that reveals the film as B-grade cinema rather than stuffy, fine-French cinema couture.

Lespert is keen on making it clear that, Laurent had always led a privileged life, despite the horrors occurring in Oran, French Algeria (his birthplace) at the time of the late 1950’s, and his family’s move away from Algeria at the time and into France. Villa to villa, despite Laurent’s apparent talent for fashion and designing, it shows just how much luck (good and bad), and being at the right place at the right time gave Laurent the opportunity to head the House of Dior, following Dior’s sudden death at the age of fifty-two. But, the impact of the Algerian War of Independence doesn’t stop there as it sucks Laurent back in when he is conscripted to join the French Army. Despite being the head of the House of Dior, Laurent enlists, only to be subjected to wide variety of medical tests that lead to illness, with tortuous means of remedy and an expulsion as Head Designer and a chance to head his own fashion house in the early 1960’s, YSL.

One of Yves Saint Laurent’s strengths as a film is showing the relationship between our self titled character and giving audiences a glimpse into the complicated life that he and his life partner, Bergé, really had. The heart of the film is seen between Niney and Gallienne, who give great insight on the chemistry between the great minds of such a powerful fashion brand and the inner workings of business geniuses, but a poorly matched couple. While watching the film, I couldn’t help but notice how tasteful and well-constructed the scenes and relationship between Bergé and Laurent is highlighted, while earlier films this year, specifically the narratively crippled James Brown biopic Get On Up hardly gives justice to the complex inner workings of the business partnership and friendship between James Brown and  notoriously anonymous Bobby Byrd.

I have to admit, up until the film introduces Laurent’s muse Loulou de la Falaise, played by Laura Smet, I was confused, as I knew that Léa Seydoux (Blue is the Warmest Color) strolled the red carpet in Cannes earlier this year for her role as the infamous muse. Once I was out of the theatre and was able to check my smart phone, it became clear that indeed, Seydoux did play de la Falaise, but not in this Laurent film. Saint Laurent, the other Yves Saint Laurent film made this year, who made its premiere at the Cannes Film Festival, will surely be a daunting competition for this film, seeing as it was embraced and accepted into the highest class film festival, while this Laurent film may very well be the department store version of the Laurent story.

Sadly, Yves Saint Laurent is a displaced and de-shuffled film with too many frills and not enough confident movie struts. Guided by lust, sex, drugs and power, Laurent’s life, as the film depicts, is a confused and misguided array of stokes of genius that are hardly addressed and never explained. The famous designer, who was credited for being a big influence in the fashion of the Beatnik generation, as well as being accredited as one of the first designers to revolutionize the classic female tuxedo for women and being one of the first designers to introduce the “ready-to-wear” line of clothing, is highlighted in the film with dates and prevalent moments in history, but with not enough relevance in the film and for its audience to understand the works of such profound and influential fashion pieces.

Laurent, in his earlier life, was known for being a neurotic, behind the scenes type figure. While the film does a terrible job of subtly showing audiences such and instead indiscreetly adding pieces of dialogue like, “shy people rule the world”, or “the great things we know come from neurotics” really shows the poorly fabricated talents of director Lespert and his screenwriters. While the film shows that Laurent indeed does come out of his shell in his later life (like his internationally popular nude pose seen below), exposing himself as a sexual deviant and socialite overindulging in places like the widely known Studio 54, the film itself does take a social dive, establishing itself much like its creator–a desire to place itself in high culture but instead becoming too much a part of crass culture.

As a crash course and entertaining look at the life of one of France’s most beloved designers, the film may very well be too artsy for passive movie goers, and too poorly constructed for snobby film enthusiasts. While the exploits of sex, drugs and the rip and tearing of the stitched up fashion industry relationship between Laurent and Bergé may very well be the film’s highest points, Yves Saint Laurent’s intended moments of rapturous character climaxes on the catwalk, may very well be, as Right Said Fred puts it, too sexy for it’s own good. Taking away from the extraordinary life of an innovator, and making Yves Saint Laurent more of a caricature until its Cannes equivalents release, this Yves Saint Laurent may very well be the diluted product of a more concentrated story of a man we have yet to truly see.