Fresh off the fading trails of the super popular, viral ALS Ice Bucket Challenge, comes a new viral campaign for the avid film-goer in all of us. I have never been one to promote the use of hashtags, but there is one hashtag campaign that I cannot dare ignore, and that is for #cinephilephoto hashtag happening everywhere right now.

The #cinephilephoto hastag campaign is one, unlike the infamous ALS Ice Bucket Challenge, where no monetary funds are exchanged or transferred. Instead, the campaign is just to promote the wonder and beauty that is film and cinema. The rules for the campaign are simple: tweet and hashtag a simple shot from one of you’re favourite films, and nominate three other people to do the same. Here is our tweet below. 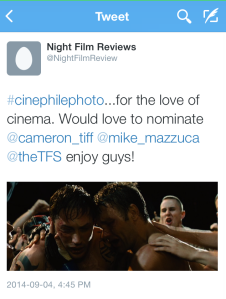 If you aren’t sure which film we tweeted, make sure to check it out immediately given it being one of our favourite films of the decade so far, as well as what we’d like to call ‘the ultimate guy-cry film’.

We couldn’t have asked for a better campaign than this one to kick off TIFF 2014, which is why we gladly nominated the artistic director of TIFF, Cameron Bailey.

Spread the word, keep it up and let the light of cinema shine and brighten each and every one of your days.