Toronto–November 7th is a big date for the 2014 North American Box Office.

The weekend marks the beginning of the year’s Holiday movie season, with Christopher Nolan’s newest epic Interstellar and Disney’s hopeful money maker Big Hero 6 hitting megaplexes in wide release in search of big profit to justify massive investment by their respective studios. Costing an estimated $165 million each, both will look to gross in excess of a billion dollars, continuing the trend of Nolan’s films and Disney’s Frozen. With that said, Toronto has become an essential tool in the marketing and hype-building of these mega-budget blockbusters, mostly within Canada, but thankfully hasn’t lost it’s unique ability to introduce darling indies to the world either. Director Bill Taylor and actress Tommie-Amber Pirie’s film Don’t Get Killed in Alaska is one of those darling indies Canada’s movie capital gets to unleash on the movie world this weekend. When asked how he feels opening his film on the same day as Nolan’s much anticipated sci-fi tale, Taylor responds, “I could care less. People who are coming out to see my film are coming to enjoy the great talent that is found all around this amazing city”. I think he was on to something. So began our discussion of the hugely Canadian film made on a teeny-tiny budget.

In comparison, the budget for Don’t Get Killed In Alaska is the David to Interstellar and Big Hero 6’s $165 million dollar Goliath. In fact, the budget for Taylor’s feature film debut rewrites the definition of micro. Produced in association with the Ontario Arts Council, the film is one of the first to be produced by First Love Films. Founded by producers Andrew Nicholas McCann Smith, First Love Films is dedicated to working with talented individuals on both sides of the lens to create quality films. Because of this, Taylor isn’t concerned with his competition, but is content with providing an alternative to the mainstream marketplace. “I wanted to tell a story that is as universal as possible,” he says, “one with universal themes of family that are intimate, yet comfortable and uncomfortable at the same time.”

Don’t Get Killed In Alaska is a coming of age drama about a young woman named Liney (Tommie-Amber Pirie), who is forced to toss her better judgment aside and ask her family for monetary relief for the irresponsible actions of her boyfriend Dan (Ben Lewis). Focusing on the separate lives of each of Liney’s immediate family members, including her mother Jan (Rosemary Dunsmore), her brother Rob (Gianpaolo Venuta) and father Lorne (Oliver Dennis), Liney must make a decision about her next steps before the people who love her most make it for her.

Don’t Get Killed In Alaska can easily be described as the quintessential definition of a passion project. In fact, Taylor remarked that the film was never supposed to be his first feature. “I was in the National Screen Institute Feature Shorts Program and a completely unknown commodity in the Canadian film landscape. My main goal was to write a story that anyone could accept; one with a strong sense of estrangement, division and bitterness.” remembers Taylor. Never intending to write a story about family, fearing that airing his own family’s dirty laundry would land him nailed to a cross, Taylor knew that “the responsibility of being a writer is not to write for yourself, your responsibility is to write for your audience”, which is exactly what he did.

Despite the nature of the film’s content, it was intriguing to see the genuine joy and admiration Taylor couldn’t help but radiant while speaking about the writing experience and shoot. Taylor explained that the idea for the film was born while rummaging through some old unpacked boxes from his mother’s recent move. Remembering finding a note from his father to his mother written at the height of their separation, the note said, “You can have the kids. I want the motorhome and the boat”. Taylor describes his feelings at that exact moment as: “a moment that I couldn’t help but feel as a product of my parents hate for one another; a bargaining chip for a motorhome and boat that were both decaying and completely gone to shit.” You would think that a project based on something so bitter would not end well. Born from the fiery and messy divorce of his parents, nothing separated Taylor from his need to soldier on with a script and story he knew he had to tell.

Initially, the interview was supposed to involved Taylor as well as his star Tommie-Amber Pirie, where I was going to discuss the film within the cannon of Canadian coming-of-age cinema and shape an article around this notion. But like life’s predictable unpredictability,  Tommie-Amber was unable to join for the face-to-face due to her commitment to Space Channel’s Bitten (I later conducted a phone interview with Tommie-Amber), and my direction and plan for the interview was changed drastically, leading up to a notion that encompasses the entirety of the film and also the interview experience as a whole.

One of the most commonly used epigram’s today, and one that will be researched and looked up more-so now thanks to a character in Nolan’s newest film, is Murphy’s Law. A common adage, Murphy’s Law states “Anything that can go wrong, will go wrong”. Yet, according to Taylor, there were nothing but fantastic vibes on the set of Taylor’s intimate shoot. “The cast and crew were great. Every new location we went to, we had this very focused summer camp vibe; complete with bunking up together, Ping-Pong tournaments and a determination to get the work done. We were all willing to work together, and whatever obstacles we faced, we figured it out. Every new location we went to, whether we were falling on one another on one set or completed isolated from each other on the next set, we ventured on to showcase our talents as individuals as well as a love and passion for this story”.

A passion that couldn’t be described best if it wasn’t for its brave and confident lead, Tommie-Amber Pirie.

Pirie, a veteran actress working widely across the landscapes of Canadian and Hollywood cinema, has been seen sharing the screen with Apatow favorite Jay Baruchel in The Trotsky as well as holding her own next to Harry Potter himself in the romantic comedy with an identity-crisis The F Word (or What If) starring Daniel Radcliffe and Zoe Kazan. Destined for the role of Liney, Taylor says, “She called me one day and said, ‘you wrote my life,’ and for me, she looked like Liney and moved like Liney, and when she returned for the call backs, she nailed it.”

I couldn’t agree more. Pirie, an actress that commands every scene with poise, assurance and bravado, graces the screen delivering a memorable account of a very familiar and relatable Canadian Tomboy. Complete with a wardrobe that could be seen hanging off the mannequins at your local thrift shop, Pirie was glorified by her gracious director. “As soon as she read the script, as soon as she read that character, she started working. She knew Liney. She was Liney. Come to think of it, she got the script before anyone else; I don’t know how she got her hands on it. She can be very sneaky sometimes!”

Taylor believes in talent and is a pioneer of ethical filmmaking. “The worst part of my job was telling certain actors they didn’t get the part. I remember telling my mom about it and her completely agreeing with how much it sucks,” laughs Taylor, thoroughly enjoying his trip down memory lane. It was almost unreal, yet refreshing, to hear a director enjoy basing his casting decisions solely on talent. “I’m going to grieve that day when I can’t choose the best actor in the room based on talent and have to choose them based on business. It’s terrible;” he remarks, “there is so much great talent in this city and lot of them don’t get the roles they deserve because they don’t have the name recognition of other actors.”

Over the phone, Tommie-Amber was sweet as pie. Recalling her experiences before being notified that she got the part, she spoke about her director with great appreciation. “Bill likes to tell stories rooted in the human experience. He wanted to tell a story told entirely from the female perspective and most of all, he wanted the film to speak on an emotionally rich, powerful way that wasn’t quirky, but straight forward; a true family drama.”

Taylor admits that the film is a current take on many of the elements plaguing so many youth today. “We live in a very particular time. There are very few opportunities and the ones Liney does have are very far away,” says Taylor. “In Canada today, we are at a 25% youth unemployment rate. This notion of venturing far away is one that is not very far from reality. This choices youth are making today is one that is tearing families apart.” Which added to the essential nature of making the film here in Canada. Helping contribute to idea that great films still come out of this wonderful city, Taylor was adamant about shooting in and around Toronto.

This weekend will surely be one that director Bill Taylor and star Tommie-Amber Pirie will always remember, opening at a local art-house cinema while the rest of the city plays continuous frames of animated characters Baymax and Matthew McConaughey in a space suit.

I couldn’t count the amount of times Taylor reiterated throughout the interview, phrases like, “the only place in our budget”, “allowed us”, “cheap”, or “free as possible”, really solidifying how much of an independent film this really was. Thankfully, quantity does not always mean quality, an element that is the biggest star in Taylor’s film.

“Don’t Get Killed In Alaska is a very contained, documented story about a family that really loves each other but struggles in every way possible to express that. For me, the film is so reliant on characters and strong performances. That’s where I had to spend the time. Dialogue is cheap and my efforts were focused on genuine emotions; if it doesn’t feel authentic, you lose your audience very quickly”, concludes Taylor, in very refreshing manner.

It’s been a while, but every so often, you watch a film where the filmmaker wants to keep his audience, more than he wants to make money. Don’t Get Killed In Alaska is that film, and Bill Taylor is that filmmaker. 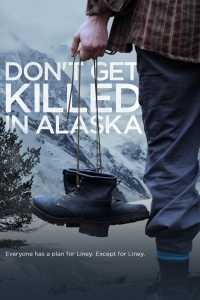 Don’t get Killed In Alaska is now playing at the Magic Lantern Theatre–Carlton Cinema, playing from November 7th to the 13th, with showtimes at 2pm and 7pm.