A sense of belonging seems to be writer/director/producer Neill Blomkamp’s greatest asset when it comes to filmmaking. The man behind the revered District 9 picks up the pieces of his fumbled second feature film Elysium by introducing us to the second cutest robot to ever grace the silver screen, Chappie.

If you are wondering who managed to snatch the first place title of cutest robot to hit the big screen, I would easily argue Wall-E as the clear champion, albeit, animation (as well as Disney) have a fantastic way of bringing out the cute in everything, even a teapot. Luckily for audiences and movie-goers, Chappie is different; Chappie is real: Chappie is alive and Chappie is very much one of the best things to happen to the year 2015 in film.

Blomkamp again introduces us to a world not far off from the one we live in today. Launching his story in his hometown Johannesburg, South Africa, local police are shown to have begun implementing a robotic policing force, known as the Scout program, from a weapons corporation Tetravaal. Its creator, Deon Wilson (Dev Patel), has been successful in creating easily operated and incorruptible weapons for the greater good, but we quickly learn that Deon is in search of something more – artificial intelligence and the creation of the first living, feeling sentinel being.

While Blomkamp’s film relies heavily on action, visual effects, and character development, Chappie can easily be hailed as the director’s most personal, emotional, and sentimental feature film. Never shying away from very real and often times imaginative social commentaries set within uncomfortable and contemporary political setting, Blomkamp wastes no time in introducing Chappie, developing his character as much (if not more) than any other human being seen on screen.

Hot off the heals of a very painful and personal failed program, ex-soldier turned engineered Vincent Moore (Hugh Jackman)  is persistent to prove Wilson’s Scout program as a failure, never being able to trust or rely on artificial intelligence. Deeming the program unpredictable, and arguing the ethics of A.I with that of a human being and the morality, ethics and fine fabrics that make man, Moore sets up the film for its greatest and deepest commentary. The very essence of Chappie relies heavily between the conflicts and struggles of two very real people: Deon and Vincent, and how their creations used for the greater good become catalysts to eliminate crime in a violently filled South African capital. Yet, throughout Chappie, the greatest animalistic behaviours and torn examples of violence, inhumanity and injustice/crime are seen by human beings. Moore spends most of the film trying to deceit and ruin Wilson, from nothing more than we can understand as revenge and jealousy, allowing us to pose the questions: would we want this man governing and policing our streets? Are these the beginnings of corruption?

In addition to these scenes of treacherous human behaviour, the realest and most humane scenes of the film are those, almost exclusively, involving Chappie. From a quiet and sad encounter with a dog, to a very confused and apologetic encounter with a bleeding police officer on a bridge during a heist, to his many interactions with his “maker” Deon, Chappie shines with the most unwavering signs of humanity and moral justice.

The underlining context of Blomkamp could easily be observed for many viewings, which makes Chappie, a robot with a bright orange “reject” sticker across his forehead, one of the most brilliant and under-apprecaited films of 2015, deserving of being seen at least twice.

Thankfully, although Chappie may be credited as being the most human character in the film, despite the simple fact that he is indeed a robot, he is not the only interesting individual. Endearing robot aside, Blomkamp’s emotionally rich and deeply subconscious film is filled with fascinating characters. The two roles bound to be the most talked about make up the duo that will determine whether or not people enjoy the film. Of course, the pair is none other than Chappie’s Mommy and Daddy: Ninja and Yolandi (Watkin Tudor Jones and Anri du Toit or, better known as, Ninja and Yo-Landi in the rap/synth South African musical duo Die Antwoord). Quite possibly the biggest reason Chappie may not be a success nor treated as the bravest science fiction film of 2015, is the inclusion of Die Antwoord. As it was for myself once I got wind of the casting choice, their involvement may be a real mystery to viewers. Truthfully, I wasn’t fully able to understand their significance being cast up until the rolling of the end credits, ironically enough, while their song Cookie Thumper! penetrated my ear lobes. Blomkamp, a master filmmaker whose obsession with analyzing and capturing the essence of reality and significance of his hometown upbringing, truly brings a unique commentary about lower class societies, gangster culture, and the ultimate understanding of low-income family raising alongside crime-filled patriarchal ties. 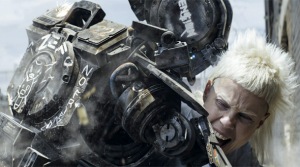 While Ninja and Yo-Landi, with the help of their accomplice Amerika (Jose Pablo Cantillo), organize a plan to capture Scout engineer creator Deon in an attempt to shut off the Scouts that would thwart their plans of a heist to pay off a cruel underground king Hippo (Brandon Auret), the gangsters find Deon in the middle of his rogue, A.I operation. Once captured, the petty criminals beat and torture Deon, to find a damaged Scout in the back of his truck, and forcefully get Deon to create and raise Chappie. There are many questions of ownership throughout the film. Blomkamp however, manages to discreetly – yet indiscreetly – label each influential person in Chappie’s life as the following: Deon as “maker”, Yo-Landi as “Mommy”, and Ninja as “Daddy”, allowing the audience to question the ways in which each character influences Chappie’s upbringing. Think of it as robotics parenting. This highly complex but seamlessly harmless label is mostly ignored. Yet, it sets up one of the most interesting analysis of the film; the notion and creation of beings, in this case, Chappie, much like our own beliefs in human creation.

While Deon encourages Chappie’s indescribable appetite for goodness and avoiding violence, his parents (mostly Ninja) seem to interact and explain to Chappie that violence is a key needed for survival. His monologues of putting people to “sleep”, “getting back what belongs to daddy”, and “living and not dying” are at the forefront of the many values people today implement to their own flesh and blood. This triangle of patriarchal relationships is by far  one of the best parts of Chappie and sets up perhaps the least commercial subplot of the film.

Left as scrap metal and potentially serving as liquid hot titanium for the use of another Scout, Chappie is easily one of my favourite films of 2015. Dynamic, explosive and heart-wrenchingly funny, its hard not to glorify the film without giving great admiration to the man in the motion capture suit: long-time friend and go-to Blomkamp collaborator Sharlto Copley. Copley, who has been mis-casted in all of his previous roles: The A-Team, Maleficient, Oldboy and even in Elysium as the antagonist,  shows great range as a character who never shows his face, but easily becomes the one with the biggest heart. Copley has never been better, and although he is never seen on screen, his nuanced mannerism, meek and timid acting as well as his childlike innocence reinvents the adorable in science fiction. Think Scarlett Johansson in her, just clunkier and with bigger ears.

Chappie is driven mostly by being one of the most interesting character development narratives of the year. Through his busted hunk of broken titanium, the audience is set on an emotional roller coaster as it shares in Chappie’s greatest successes and failures. Chappie may easily be labelled as a black sheep film once it opens  seeing as many wouldn’t be open to the genre, narrative, and commentary Blomkamp is attempting to make with this film, rather focusing on the fact that the director may helm the next Alien film. But Chappie may very well be Blomkamp’s best film to date, without ever trying to be too “cool”, despite Chappie’s swagger, walk, talk and bad-ass vocabulary.

I cannot imagine the obstacles filmmaker Blomkamp had with his third feature. From re-shoots in British Colombia, Canada, to a toxic and explosive ending to the relationship of Ninja and director Blomkamp, as well as trying to display both comedic and serious tones of the film, Chappie can be seen as Blomkamp’s own labour of love.

Chappie taught me to never judge a book by its cover, despite being a very confused and unidentifiable science fiction product for audience members. People are always fearful of things they don’t understand or can’t label. Even though the bling, tats and stickers that embody Chappie may very well be his downfall, Blomkamp’s film, as well as Chappie himself,  deal with the very fabrics of identity, control and being yourself. I have no doubt that this black sheep of a film, in many years to come, will earn a very respectable cult following, inevitably blooming into a golden swan. Chappie is an original, walking, talking, rapping example of the many things wrong with science fiction today; including Hollywood reboots, unoriginality and the socio/political commentaries so many filmmakers get wrong time and time again within the genre. Don’t turn your back on Chappie, its more than just a machine, it is the first great film of the year – one that will surely touch your heart while making you feel and think differently about the way we live in our own, robotic lives.

Was Chappie one of the best films of the year of complete dud? Will Chappie live on or die quick and fast by its own complexities and deep questions? How was the cast? Leave your thoughts below and share this review if you wan Chappie to live on!

In case you’re wondering, here are TWO very different trailers that show the very uniques sides of this wonderful film.

Make sure to check out Trailer 2 Below!