When The Best Exotic Marigold Hotel was slotted to be released on the same weekend as Marvel’s new powerhouse film franchise The Avengers, no one thought that Fox Searchlight Pictures’ counter-programming colourful indie would perform the way it did. Adding veteran and polished masterclass actors Judi Dench, Bill Nighy, Maggie Smith and Tom Wilkinson, the original film surpassed all expectations by grossing well over $130 million at the worldwide box office, alas, allowing for the possibility of a sequel and this review.

Three years later, Dench, Nighy, Smith and rising young star Dev Patel are back for The Second Best Exotic Marigold Hotel in all its foreign glory. Spicy, ill-tempered, and relishing in the highly played escapist appeal of its audience, Second proves that although second servings are always a popular portion, it doesn’t mean they always go down as well as the first.

The Second Best Exotic Marigold Hotel is a forced, highly improbable sequel with outrageous plot points, a highly glorified dose of glitter, glam and colourful sari’s that could have been left untainted with its original film.

Jumbling too many sub-plots and not focusing on the greatest issue at hand, Sonny (Patel) – the highly unlikely successful proprietor of the Best Exotic Marigold Hotel – is forced to find ways of expanding his fruitful hotel chain for the elderly and beautiful once the occupancy of his first building has reached capacity. With the help of his trusted and self-loathing business partner Muriel Donnelly (Smith), the two embark to the United States to meet with a successful hotel chain and it’s CEO Ty Burley (David Straitharin). With the warning of an investigator coming to the hotel to judge investment potential and the craziness of the wedding between Sonny and his beautiful bride Sunaina (Tina Desai) looming overhead, Sonny along with the hotels patrons must juggle the arrival of a potential rival and childhood friend of Sonny and Sunaina, Kushal (Shazad Latif), a potentially love-seeking investigator Guy Chambers (Richard Gere), a tuk yuk hit man, and ambitious dreams of the first hotel’s customers.

Some of the best scenes of the Second are the scenes that do not intend to be funny at all and the ones that are most emerged into the thick of beautiful Indian culture. A scene involving a newly promoted Evelyn Greenslade (Dench) and her trusted fabrics consultant, scenes between the hopeless romantic Mr.Chambers and Sonny’s mother Mama G (Lillete Dubey), as well as some awkward historical dictating between Douglas Ainslie and a young Indian boy are easily among the most charming scenes in the film – the ones that bring you back and offer a reminder of the original film’s charm.

Dev Patel, who is making a great impression in Hollywood following a very affecting and fantastic turn as Jamal in Slumdog Millionaire, as well as an amazing supporting turn in HBO’s The Newsroom, is enjoying immense success in 2015, relishing the release of not only one film this week, but also his sci-fi project with District 9 director Neill Blomkamp Chappie. The latter is in fact by far the better of the two performances. In The Second Best Exotic Marigold Hotel, Patel plays into so many Westernized Indian stereotypes that were tastefully fought off in his feature film debut. Patel’s fast talking, highly irrational, clutter brained Sonny is a departure from Patel’s talents. Hopefully, audiences will see the potential of his talent in the underrated Chappie. 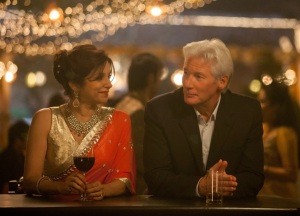 Inconsiderate to conflict and adding too much to the characters and the simple plot that could have been developed better in the writing room, Ol Parker should have focused more on the main issues surrounding the hotel and its faithful customers, as opposed to preposterous hits along with returning characters we have no time and patience for.