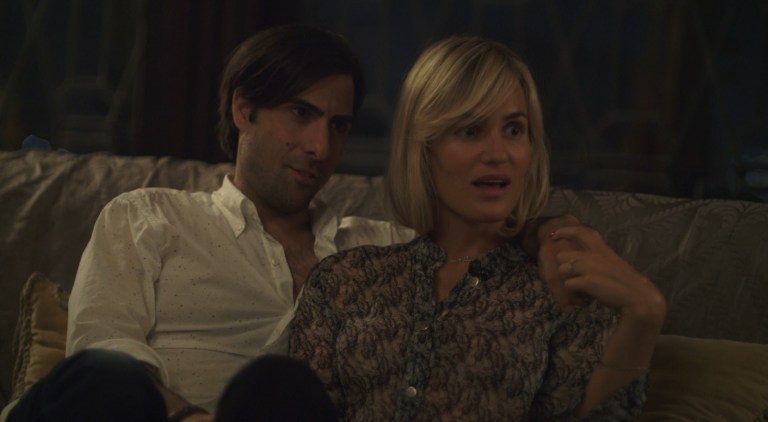 The notion play-date is one that is easily understandable in the world of children. Play-dates imply when children are taken to specific locations, play, interact, laugh, cry and then, eventually go home to rest for the next day of their exciting and fruitful lives. The terms and conditions of the play-date for adults are still, for the most part, under strict and heavy analysis and consideration. The Overnight is a film that looks to push the boundaries of adult play-dates, often times with unexpected, shocking, and completely bewildering results.

Moving from Seattle to the liberated and highly hipster LA with their young child RJ (R.J Hermes), square couple Alex and Emily (played by Adam Scott and Taylor Schilling) seem to have a hard time making new friends. Luckily for them, R.J was able to land a prestigious invite to a birthday party at a park where Alex awkwardly and unsuccessfully tries to assimilate with the parents of the birthday boy. Luckily for the highly emasculated Alex, Emily, who feels guilt ridden going to work rather than staying with her boys, saves the birthday by showing up with a bag of gummy-worms. RJ is happy, Alex is saved from immense solitude, and what begins as an average awkward meet-cute between parents becomes an invitation from the mysterious Kurt (Jason Schwartzman).

Kurt, who may or may not be a practicing vegan on a cleanse, invites Alex and Emily to their warm estate home just up the hill from the park in hopes of acquainting the new couple to the neighbourhood, touring schools out for RJ, and a offering them a chance to get to know the unofficial “mayor” of the neighbourhood, himself. It all seems quirky and awkward at first, which is exactly what we expect.

At Kurt’s house, Alex and Emily meet Charlotte (Judith Godrèche), the very beautiful and exotic French wife to Kurt. As expected, the two couples shares stories of work, friendship, and their relationships, until, very early on, Alex and Emily decide to go home because of RJ’s exhaustion.

“Only in America do we let children dictate when when the night is over!”, exclaims an overly excited Charlotte, while Alex and Emily look at each other in agreement. So what begins as an innocent night of acquittance, like any good horror film, becomes a night of deep future regret.

It’s not that we have to question who the stranger of the couples are, but as the film progresses The Overnight becomes a highly self-reflective film of relationship parameters and examines the motives and hobbies of people, while begging to ask the question as to who the “normal” and “eccentric” couple really is.

I mean sure, the film itself, thanks to the peculiarity of the script and direction of its creative mastermind Patrick Brice, asks who the “weird” couple may be, thanks to Charlotte’s ten year itch, Kurt’s “portal” paintings, and Charlote’s interesting acting career. Yet, boundaries are pushed, egos are blown up, and myserties are revealed – sometimes to anything but normal results – but nonetheless, The Overnight is a film that will keep you highly intrigued.

In less than eighty minutes, Brice’s highly confusing and sexually driven comedy/drama runs big circles around your head asking important questions of masculinity, femininity, sexuality, and mostly really asking the question of: what is going on here?

One of the biggest strengths of The Overnight is its ability to depict a shrewd picture of the possibilities of parental bliss. Brice, who has amazing skill in sending hyper-real images in different directions, chosen solely by its audience members, topples and turves reality with surrealism. In early scenes, Kurt, who shows an immense passion for putting his youngest son Max (Max Moritt) to bed, uses mood lighting, incense, and keyboard chords, could easily be mistaken for a seasoned pedophile. Yet, the narrative swiftly and slyly changes its gaze to that of the children in bed, to the innocence and insecurities of Alex – a man who is glorified and praised for most of the night – but belittled for the majority of his life. While Kurt wisps away the children into dreamland, Alex is comforted by Emily’s warm hands…and Charlotte’s?

Essentially, The Overnight becomes a film that is a neon and unbelievable portal to the oddities of every person’s deepest and darkest desires, staying in the radius realms of the challenges and thought of monogamy, boredom and adultery. Highly sexualized, unapologetic, and crudely graphic, the film may not be perfect for new couples to watch, but it surely is a fantastic way to awkwardly invite you and your loved one to one of your’s friends place for dinner. Foxy, electric, yet coming up short in the areas where it needs to have more girth and stamina, The Overnight is a one-night stand type film that you could easily do with just one meeting, and recollect with a smile here and there while swinging back to memory for a good week or two after its initial view.

Is The Overnight a film you would consider spending the night with, or avoiding all together? Want to get into bed with its eclectic characters and scenarios or rather just let them swing alone? Leave us your thoughts, feelings and let us know if you’d like to come over for a pizza night and discuss the movie in person, or just below for now.

And if your curious, we don’t usually do this, but below are THREE different videos highlighting The Overnight. Enjoy.

The Overnight– The First Seven Minutes