It is becoming a recent trend on the silver screen that, the city of Angels, is quickly becoming the city of demons. With this entry, showcasing a very dark, gritty and neon-lit Los Angeles, inhabited by the worst of the worst, director Fabrice Du Welz’s newest follows in the deep and imprinting footsteps of Drive, yet Message From The King is a very simple, revenge-thriller homage, giving tribute to the films it was inspired by in the 80’s. Mixing the neo-noir elements of film with minimalistic action sequences that make for a solid film and overall enjoyable first screening for TIFF16, Du Welz’s highly stylized actioner is one captivating thrill ride.

As the film begins, we aren’t really given any real introduction to our protagonist. Mysterious, quiet and observant, Jacob King (Chadwick Boseman) arrives in Los Angeles like almost anyone else, looking for something. Yet, unlike the many eager young people searching the streets of Los Angeles for fame and fortune, Jacob is just looking for his younger, beautiful sister Bianca (Sibongile Mlambo), who, in fact, came to Los Angeles for the fame and fortune dream. Unfortunately, Bianca’s beauty attracted the wrong crowd of people, and Bianci soon found herself at the tail end of the needle, which lead her buried in the garbage in a nearby dumpster. Jacob, upon arrival, soon learns of Bianca’s death at a nearby morgue. Shaken and saddened, and with the help of Bianca’s druggie neighbour Trish (Natalie Martinez), Jacob begins a decent of vengeance in the primal criminal underworld of Los Angeles.

Message from the King is an interesting film, in the grand scheme surrounding its star, Chadwick Boseman. Boseman, who was recently cast as the Black Panter in the Marvel Cinematic Universe canon, is really given a fine opportunity to prove his action chops with this film. Luckily, Boseman doesn’t disappoint, even while being able to practice his South African accent, using the same coach he’s been using for his upcoming standalone Black Panter film being directed by the supremely young and talented filmmaker Ryan Coogler. Boseman, who adapts more of a brooding Clint Eastwood like hero, the stranger from afar, who comes to a local town to wreck havoc of justice and morality, taking down anything and anyone in his way. 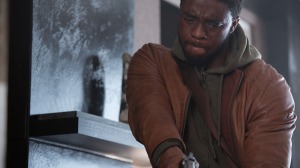 Apart from having a stellar cast with the likes of Teresa Palmer as the unsuspecting helpful neighbour Kelly, to the shady dentist Dr. Wentworth, played excellently by the square-jawwed Luke Evans, to a small role for Tom Felton, playing Bianca and Trish’s drug dealer Frankie, to the always impressive Alfred Molina playing the super rich and super sketchy movie producer Preston, Du Welz assembles a cast of very high caliber, delivering an action-thriller piece with many motives, intricate pieces and endless conspiracies.

One of the most exciting elements of the revenge-thriler genre, especially new films placed within this very rich and lasting cannon, is finding out what exactly the protagonist’s weapon of choice is going to be. Du Welz along with his screenwriters Stephen Cornwall and Oliver Butcher, decide for Mr.King, nothing other than a bike chain. Yup, you heard me right, a damn bike chain. The same kind of chain that used to dirty your hands when the chain found itself off the gears of your bicycle, Mr.King walks through the front door of all the baddies hideouts with nothing other than a bike chain, while everyone else is armed with knives, guns and clubs, King avenges his sister’s death by chaining each and everyone of these generic baddies to a pulp. One of the most memorable baddies in the film, Zico (Lucan Melkonian), who, after a first encounter with Mr.King, goes to Dr.Wentworth for some reconstructive jaw surgery, dawns a clear face mask, which makes Zico’s fight sequences with Jacob all the more terrifying, exciting and monster-esque.

While many came out of the World Premiere of Message From the King with a very Blade Runner nostalgic feeling, I couldn’t help but see the very unarguable similarities to Refn’s Drive, a brooding, atmospheric action piece that is much revenge-thriller, as it is character study. While both protagonists in both these films are given less than expected back-stories, it does become clear that love is the greatest motivation for vengeance.

As King comes to the end of his onslaught of revenge for his sisters death, there is a very skeptical tone in the film, where the audience questions Jacob’s keen investigating, combat and sneaking skills, especially when King answers that he is a taxi driver in the opening frames of the film, during the customs interrogation scene.  While I won’t dear ruin the ending and the comprehension of King’s skills, Du Welz does a fantastic job of engaging the audiences in all the triumphs and pitfalls of King’s journey, despite some absorbingly disturbing revelations.

While Message From The King isn’t a perfect film, audiences can be sure to understand that each and every one of the characters presented surely have all their own agendas planned. Some of them, in pursuit of wealth, others, in pursuit of power, while Jacob and Kelly are only after what’s deserving of the people who showed Bianca an early funeral and an overall better life and peace amongst themselves.

One of the most interesting elements of Message From The King is its deliverance of empathy. Empathy is never truly given to any characters, despite all of their good or bad intentions throughout the film, yet, Jacob, who truly tries to do what is best for himself, his sister, and his very, at times, warped sense of ethical logic, is question when acts of violence are in front of women, children and innocent by-standers, without any regard of the repercussions of such graphic acts. Message From The King is not a perfect film, yet, it may not even be the best revenge film you may see all year. One of the clearest messages of the film is that, Boseman is a force to be reckoned with, and we can’t wait to see what he is going to deliver to the Marvel universe. If you’re curious, I would highly suggest watching this film, even if its for the fact of Boseman dedication to the craft and his passion to performing all his own stunts himself. It may be quite clear, the king has arrived.

What did you think of Message From The King? Decent action-revenge thriller, or complete waste of time? How does Boseman handle his first ever solo action film? Does it make you excited for Black Panter? Whats your message? Leave them below!