Philosopher Thomas Hobbes foretold a future “War of All Against All” in his book Leviathan, published in 1651. In his political/philosophical novel, he wrote his masterpiece during the English Civil War, which occurred from 1642-1651, arguing that a state of sovereignty is the only which way a body of politics can operate, without interference for third party or outside sources and individuals. His “War of All Against All” is an idea that was derived from the ‘state of nature argument’, where government can only be successful if it is strong, undivided and unified.

Now, I’m not sure if writer/director John Michael McDonagh intentionally wrote a script and titled a picture that could [not only be] so relevant in the United States with regards to government and policing today, but also, be such a comical and cynical interpretation of the very brutalities happening within America involving its citizens and civilians with such bravado, and most of all…balls. One has to wonder, is McDonagh warning everyone, or just laughing at them, especially since it’s titled is source from such a serious and foreboding doctrine.

McDonagh, who was born in London, England, but is most notably known for being a very predominant Irish citizen, and the older brother of Martin McDonagh (considered one of the greatest living Irish playwrights today) delved deep, back into crime comedy genre with War On Everyone after The Guard became the most successful Irish Independent film of all time. Similar to The Guard, which starred his frequent collaborator and muse Brendan Gleeson, McDonagh decided to shoot his third film in the United States for the first time, keeping away from his native Irish land, and uses the landscapes of Albuquerque, New Mexico as a hellish field of nightmares. Surrounding his narrative on two very intractable corrupt cops who makes it their mission in life, and in their careers, to make every scumbag and criminal who crosses their path, as miserable and unfortunate as possible, War on Everyone is easily one of the most unsettling yet hard-hitting black comedies of 2016 that leaves all regard out the door.

While the premise and story of War is nothing to marvel at, the film itself, is easily one of the hardest films to look away from and not finish, thanks to the outlandish and quite unexpected direction McDonagh decided to take his story and characters on. Luckily for us, McDonagh decided to venture off with new actors to play the role of intimidating asshole cops on crack, to a new level.

With Peña, an actor who isn’t unfamiliar with playing policemen or governing officials in the past, thanks to roles in Babel, Observe and Report, My Son, My Son, What Have Ye Done, Gangster Squad, Vacation, the upcoming CHIPS and of course, one of my favourite of Peña’s roles, Mike Zavala in David Ayer’s masterpiece End of Watch, Peña could practically get a job as a cop with all his experience in the role. As Peña’s partner, McDonagh choose someone who has never played a cop before.  Luckily for us, actor Alexander Skarsgård literally stumbled upon the role from a video that went viral, showcasing the actor at a soccer match, drunkenly rooting for his team, leading a chant, and being completely and utterly intoxicated, making not only a huge fool of himself, but showing director McDonagh everything he needed to see for his beloved Terry character. Thanks for Skarsgård behaviour during his intense period of inebriation, the video secured the role for the towering actor, whose character Terry is an un-wreckable force of chaos and brutality with no brake or lever for control, a role Skarsgård completely punches and bruises into us without apology. Skarsgård is absolutely, unapolgetically, relentlessly perfect as Terry.

While every citizen in The United States are well aware of their rights, including the right to remain silent, War is a film that really doesn’t say too much, other than offer an unlimited sources of one-liners and crass, crude jokes, heavy racial slander and bizarre perspective of criminals, but also allows the action seen on screen to speak for itself. Certain scenes in the film play off as set pieces in a play, where the intention and purpose of meaning is never really understood or comprehended, showing off personalities of certain characters and their interaction with one another, as well as bizarre interpretation of the coming to reality of a scorn and doomed society. One of these very characters is the introduction of Jackie Harris (Tessa Thompson), who plays Terry’s love interest, and inevitable life-partner. The two share very awkward tonal scenes that resemble instances of a musical, a horror and a romantic comedy, yet, Jackie’s relationship with Terry reveals absolutely nothing about him, other than his inconsistent ability to enforce ethics and morals to people, without ever compromising his own corrupt personality and desire and obsession with greed. 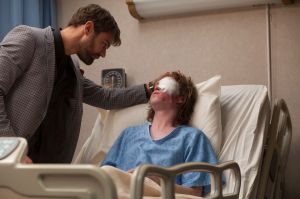 While Terry and Bob set fire to the world around them, including their own personal and family lives, the two indulge in the perks of having a badge, which include consuming countless narcotics that that they confiscate, including a large portion of cocaine from a mime-on-the-run (do mimes make a noise when you run over them?), large quantities of cash that they use for their own personal use, and beat up physically, verbally and mentally civilian that crosses their path. Luckily for the audience, everyone within the War world has as much as quick witted, vulgar tongue to argue back with are two unluckily antiheroes, that the dialogue is a measure of how far McDonagh’s script actually pushing the boundaries. Luckily, no secondary characters are truly able to deliver comebacks that compare to the joint efforts of the corrupt duo. With no regard for women, race, culture or social status, the levels of offence and discrimination are pushed in each and every scene and word that comes out of Bob and Terry’s mouths. With Calvary, McDonagh was pressured to be subdued and limited with his black humour and comedy (although there are many glimmers of it in his sophomore feature). It comes to no surprise that the writer/director aueteur wanted to return to world where his thoughts and words couldn’t be contested by people protected by the badge, which allows the grittiness of his films to faintly shine.

With really no one to answer to, other than their very strict and extremely sarcastic boss Lieutenant (Paul Reiser), the scumbag duo finally meets their match when their informant Reggie X (Malcolm Barrett) warns them of when the very powerful and royal Lord James Mangan (Theo James) arrives to town, making shady deals from a local casino and racetrack, with the help of his very colourful and Bond-esque type second in command Russell Birdwell (Caleb Landry Jones). When Bob and Terry try to one-up Lord Mangan, Mangan shows his power and strength when he outsmarts our street-smart detectives, who are trying to cash in on another very lucrative pay-day, pitting the two baddies against the OUR two baddies, for a Western style ultimate showdown, that is both gruelling, yet relentlessly violent.

The real crime in the film is how good actors Peña and Skarsgård work together. Brining out a very believable careless attitude, the two veteran actors play well off one another’s outlandish comedic acting, pushing one another’s talents and abilities to deliver characters that are both offensive, directionless, inconsequential to the law and unforgiving. It is only natural to believe that these two became great friends on set and had a blast showing up to work, playing kings of the land who rock, roll and hang out with their wang’s out.

Interpreting War on Everyone could potentially be a heavy and tasking feat for human emotions and understanding. On one end, the two agents of chaos long for affection and the love of their families, while hardly justifying the reactions to their actions. Yet, with every questionable mission Bob and Terry ensue, we as the audience really do care about their well being and the efforts of justifying how and what they get away with; we fantasize about being policemen who use their badge to park whenever we want; act however we want, get the girl and most of all, thinking in the deep and dark corners of our mind, if we WERE police officers, and we did come across a big bag of money, would we keep it? And if we did, who would REALLY find out? McDonagh truly asks viewers that the war may be on everyone, but the greatest war’s we face at the end of the day, are the ones we conquer within ourselves. Some of us may come out unscathed; others, completely tarnished and ruined. McDonagh may not have much to say other than present the scenarios to his faithful viewers, which is why War on Everyone may be one of the most enjoyable bad movies of the year.

Just be forewarned, War on Everyone can’t help show off its massive dick, while pointing a gun right at your face with an air of policeman arrogance conquering each and every scene. Have a nice day!

What did you think of War on Everyone? Piece of art and class or a complete assault on basic human rights and an abuse of cinema? Feeling harassed or rehabilitated after watching it? Don’t have the right to remain silent, share your thoughts below!