Sexual liberation is at the wake of Roger Michell’s newest feature film My Cousin Rachel, yet, it seems that in exchange for sexual liberation for an unknown female protagonist/antagonist, Michell’s screenplay of the classic Daphne Du Maurier novel compromises many crucial elements of narrative and storytelling that has become expected in modern day cinematic storytelling for elements of story that audiences today are almost completely unfamiliar with.

Upon the news of his uncle’s sudden death, Philip (Sam Claflin) is outraged that his closest living relative has deceased, despite his very hefty and wealthy inheritance his uncle has left him. Stricken with grief and guilt, Philip travels to Italy to visit a very conspicuous individual in his uncle’s life, his sudden wife and partner Rachel (Rachel Weisz), in order to get more information on his uncle’s mysterious death. Given reason to believe that his cousin Rachel had more of her fair share of blame to account for his beloved uncle, thanks to a mysterious letter left only a mere weeks before his passing, Philip is not surprised to find Rachel nowhere in Italy.

Returning back to his estate in Cornwall, Philip begins a life of solitude and resentment, before his cousin Rachel visits the estate of her late husband. Convinced of his position to confront Rachel with news of the letter and his anguish against her, Philip allows Rachel to come forward unbiased and give her interpretation of the story of her husband to Philip. Given Rachel’s immense charm and seduction and almost entirely avoiding anything about his uncle, Philip begins warming up the older woman who once was married to his uncle, despite obvious advances given to him by his childhood friend and love interest Louise Kendall (Holliday Grainger). Infatuating himself with the very experienced and wise older woman, Philip gives himself completely to Rachel’s gaze and begins a courtship that ends/begins with confusion and deception.

While the performances of Weisz and Claflin are nothing short of compelling, the issues that plague the film begin long before the film even begins. Stemming from the marketing and advertising end of the film, My Cousin Rachel’s trailer is one that asks many questions, such as; what genre is the film classified under? Is the supernatural going to be an element in the film? Who can we trust? Genre classification was one of the biggest issues lingering over the film, allowing my imagination to take over for a story that ends up being quite subtle and straightforward. The unexpected addition of mystery, thrill and even elements of horror, that the trailer almost unknowingly presents, gave me one of my most confused and unexpected cinematic experiences of the year.

While Michell’s script treads more along the gothic dramatic side of things, and the narrative flow follows closer along the lines of Cary Joji Fukunaga Jane Eyre without the very obvious supernatural elements, Michell’s script decipher’s less of the interactions and meanings between Philip and Rachel, and focuses more one the cinematic spectacle of their interactions for the sake of the audience. One of my biggest peeves with the film is how Michell’s direction and script gives almost no merit and trust in his audience, thinking that so many of the obvious foreshadowing and cinematic techniques used to push forward the story, are not noticed. Even by the trailer, it becomes clear the motives and motifs of the characters. Michell, either unwillingly or without notice, assumed that his audience has never seen a mystery film before, which makes the audiences very angry with his narrative and narrative mystery mise-en-scene choices.

Misinterpretation, misguidance and mostly misunderstood any modern day audience members, My Cousin Rachel is a very dim-witted attempt to employ master mystery to a story that the audience is already too smart for and anticipating. The original source material, written by Du Marier, employs many symbols that are up or left to interpretation, yet, Michell’s script and direction do not really allow audiences to come up with anything more or than than what is shown on screen, despite its idealized conception of what Rachel represents, how Philip goes about dealing with the issues he is facing in his life, and a story of female empowerment.

I will not lie, I found myself dreading writing this review for the simple fact that this film is one where many woman would find liberating. I have to come out and say that, I am by no means a man who discredits or belittles the opinions of women, in fact, I believe in the very real action that respect and equally needs to be taken more seriously for men and women. It is in my honest opinion that My Cousin Rachel is a very enigmatic lamentation towards the ideal of gender equality; not because the film does not present no clear good or bad guy; not because the film represents a contemporary take on what so many people in different social classes are doing today; and not because I did not love or hate the film, it is simply a very eschewed fable of tolerance and wit for the female and male genders. 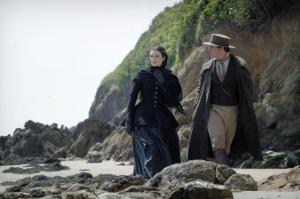 While the film plays with cinematic narrative twists and turns, and employs an almost cat-and-mouse game of wits and who-dun-its between its two stars, the chemistry (or lack-there-of) between Claflin and Weisz is spectacular, especially given its abrupt and on-demand nature of being emotionally opposites. It becomes clear quite early that both characters are tormented with the idealized notion of each other their social and societal places in the world. Both Philip and Rachel, at similar and different times, reject these social normalities for themselves, and look to make a better life for themselves and at points in the film, for one another.

Like anything that is hard, takes time or work, people’s feelings need to be hurt, broken or shattered in order for one person to succeed.  My Cousin Rachel is a new and interesting take on the idea that people from different corners and places in the world need to step on some toes in order to get to where they want and where they need to be. If there is one consistent theme in My Cousin Rachel, it would be the theme of torment, and to that my friends, I urge you to drink and wonder/ponder where and what this film was trying to get it, especially if you are brave enough to face it.