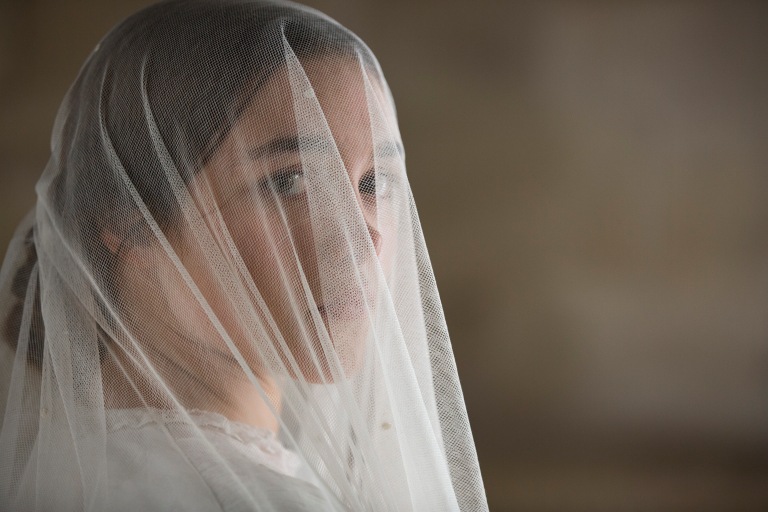 Something wicked this way comes, yet, for a very large portion of the beginning of the film, that wickedness is never really fully defined. As the film opens up in 1865 rural England, we are quickly introduced to a stunning yet bleak beauty Katherine (Florence Pugh). Katherine is on the alter on her wedding day, but don’t get this twisted, this is not your typical Hollywood wedding. Katherine was purchased with the land, a land that is apparently “not fit enough for a cow to graze upon” according to her growly and aggressively harsh, and newly appointed husband Alexander Lester (Paul Hilton). As the events of Katherine’s marriage unfolds (and these events do not take long), we find her in the bedroom of her husband’s home, naked, ashamed and facing the wall, while her husband pleasures himself in the corner of a chair beside a fireplace. 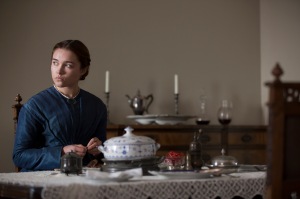 Upon Alexander’s departure from his family home, which is never revealed to Katherine, our protagonist is found bored, dumbfounded and lost in a home where she has barely any authority or purpose. With the exception of her very loyal maid Anna (Naomi Ackie), the land-hands, including one very undisciplined new farmhand Sebastian (Cosmo Jarvis), Katherine finds little motivation to get up in the mornings.

After an extended period of time away, Katherine dreads the company of her husband’s father, Boris Lester (Christopher Fairbanks). Aggressive like his son, the elder Lester is a constant reminder of Katherine’s misery. Feeling claustrophobic in the home, tired with boredom and restless, without ever being able to leave the property, unless otherwise advised, Katherine must spend her pointless days inside the home, with her prayer book and inner thoughts lingering.

It isn’t until one day, that Katherine, who hears a commotion in the workers lodge, that she finds Anna stripped naked and being taken advantage of by the workers. In a rousing display of power, Katherine orders the workers to stop, and demands Anna get back inside. It is in their quarrel where Katherine first takes notice of Sebastian, and the two share very intense and disarming looks. Days pass, yet Katherine and Sebastian cannot forget their gazes upon each other, a desire that, is more animalistic, and very empty of love. Coincidentally many days later, on a very abrupt stroll in the fresh air away from the property and by herself, Katherine runs into Sebastian in the countryside, where she runs off avoiding and tempting herself. It is not until later that night, in a very swift, almost intrusive and forceful display, Sebastian visits Katherine in her bedroom, and the two young and attractive individuals engage in a very taboo love affair.

While the actions of Katherine and Sebastian lust begins to unfold, an abundance of mostly evil and murderous events unfold along with them. With each new day that passes, the two vow to always be loyal to one another, despite having the world against their every action and notion. Treading the fine line between beautiful, loyal, sickening and morbid, Sebastian and Katherine quickly start unveiling the true motives of each other’s love, allowing the audience to see that passion, physical lust and deep-rooted longing and desire are very well the driving force of a tainted love between two very inexperienced and uneducated people, especially when it comes to the subject of love. There is no point, at any moment in Lady Macbeth where the depictions of Katherine’s and Sebastian’s love affair are beautiful or attractive, actually, the opposite is easily said, where when each of these lovers are together, a truly grotesque display of affection can easily be felt.

While Lady Macbeth is by no means an awful film, events and moments in the film are quite disturbing and awful indeed. The loss of innocence can be seen throughout each frame; the troubling interpretation of a protagonist in the film is quite unsettling and most of all, sometimes, the film seems to drive plot and its narrative, all too conveniently.

While Oldrody’s first feature film will surely be discussed and studied in academic settings for many years to come, the film begs many questions of femininity that, while it may be understood before even watching the film, can be questioned once the film’s credit’s roll. One cannot be disturbed to place Katherine’s actions, either in the category of strong female lead, or monstrous antagonist. Does being a manipulative murderer, still make you a likeable female character? I guess, upon discussing with my colleagues, the answer is yes, especially when strong and sly male characters, like the James Bond’s, the Jason Bourne’s and the Ethan Hunt’s can all still be beloved cinematic protagonist’s; especially when they are killing the bad guys, right? While many will argue that Alexander Lester is surely a bad guy, does the end justify the means? Is femininity defined or justified  by “an eye for an eye” mentality? Is this a revenge thriller disguised as a period drama or vice versa? 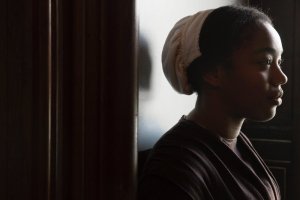 There are many aspects of Lady Macbeth that I loved, despite the eerie feeling thwarted on to me with each new scene. Easily, one of my favourite characters in the film is Anna the maid, a ruthlessly honest, moral and endearing character, who gets stricken with the inability to talk, due to all the dishonest and manipulative actions taking place in the house. While Anna’s muteness is attributed to her downfall and inception of evil within the house, I found this cinematic device all too perfect for the film’s conclusion.

Lady Macbeth is a tense and taut thriller wrapped as a period drama that will latch on and lurk in the deep and dark corners of your mind and subconscious. Its use of dark gothic cinematic tropes, alongside one of the best performances by a somewhat new talent is embedded in the very core of our black hearts. Florence Pugh is a marvel to watch, whether you side with her actions or not, one cannot helped be captivated into her daring doe eyes of vengeance, reign and lure. Pugh’s seduction is nothing short of jaw-dropping and disgusting; yet, we cannot keep our eyes off of one of the most promising young actresses to grace the screen, in a long time.