“Penises🍆 are like plungers, they’re not for pleasure, they’re for use”.

And that’s the kind of witty and original dialogue you are quickly going to expect when you gaze your innocent little eyes 👀 upon the newest R-Rated comedy surprise of 2018.

While on paper, Blockers sounds like every other teen-prom-lose your virginity buddy romp over the last two decades, Blockers is actually a 😂  film directed by a woman, substituting the ‘buddies’ for the kick-ass girls, and who’s delicate yet equally raunchy and crude feminine touch can be applied and reinvented to so many exhausted testosterone 💪 driven tropes seen for far too long.

Absent of more of the cliched male tropes that has been plaguing comedies for over…well, for as long as we can remember (with the exception of more recent films like Bridesmaids 👰 and of course Girl’s Trip 🎲) Blockers is a female centric-comedy made for, by and with the aforementioned gender mostly in mind, which only results in a comedy that we have been waiting for, for a LONG time. Gentlemen, pay attention! 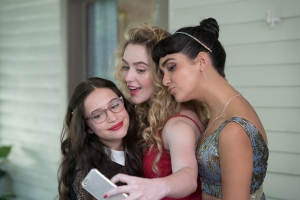 Kay Cannon, the director behind Blockers, who’s also known for writing/producing episodes of 30 Rock as well as writing instalments of the Pitch Perfect series, makes her directorial debut with a coming-of-age teen/adult feature film, 😂 , absent of any dudes and bros but with enough lady balls🏀 🏈 ⚾ ‘s, profanity and vulgarity to make the men in recent comedy films quiver in their pants. Blockers once and for all, lays to rest that age old misconception of young girls “loss of innocence” in their high school formative years, and substitutes it for a more modern notion of female pride and the power of choice.

Evolving around three young best friends dating back from pre-school; Julie (Kathryn Newton), Kayla (Geraldine Viswanathan) and Sam (Gideon Adlon) collectively decide to lose their virginity on prom night; prompting them to create a ‘sex-pact’🤝 that they must all fulfill. Julie being the only one having a long-term boyfriend Austin (Graham Phillips), expects her first time to be special and perfect, gaining the title as the group’s hopeless ❤romantic. Kayla, who chooses to lose it to her lab 🔬 partner Connor (Miles Robbins), whose nickname “the chef 👨‍🍳 ” in high school is thanks to his notorious narcotic induced recipes, represents the bracket of the girls in high school who just want to get sex over with before college. Then there’s Sam, who decides to lose it to all around nice-guy and safe bet Chad (Jimmy Bellinger), despite Sam having a huge secret that she is hiding from everybody. 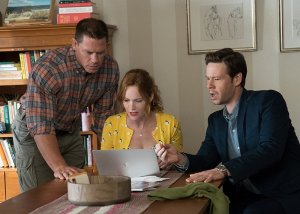 “Guess that makes us best friends too” says Hunter (Ike Barinholtz), Sam’s father when the girls and their respective parents meet for the first time.

While comedy films tend to focus very little on subplots and the background of important secondary characters, 🐔 Blockers  gives us enough of a back-story on the girls’ parents, which in turn, allows the audience to empathize with the relatable issues facing the parental crew, as well as their adapting to their ever-changing and growing teenage girls.

At first, what seems like familiar caricatures for different types of parents; Sam’s Dad Hunter being the “cool-dad” 😎 following his divorce to Sam’s mom, and the most disconnected to his daughter; Kayla’s Dad Mitchell (John Cena) being the most protective, especially when he discovers that his daughter’s prom date is the school drug-dealer; and Julie’s mother Lisa (Leslie Mann), a single mother who must deal with the realities of empty-nest 🦅 syndrome, twists and turns ensue tenfold with each passing minute of the runtime into progressive life-lesson territory. Thanks to a fresh and contemporary script ✏ from screenwriters Brian and Jim Kehoe, as well as comedic masterminds Seth Rogan and Evan Goldberg acting as producers, without forgetting some of the best chemistry between the parent actors and teenage girls, including special shout-outs to Viswanathan and John Cena, 🐔 Blockers proves that it has what it takes to show the boys that girls just wanna have fun, and totally can too!

Attesting to the film’s strengths, is Cannon’s deep and sensitive direction. Her choices to allow the emotional material on screen to really resonate with audience members is pleasantly contrasted with very whacky and often-times unbelievable 🚗 yet highly hysterical slap-stick physical comedy. While many would argue that this stark contrast  deteriorates the soft and gooey heart 💙 💜 and central core of the film, 🐔 Blockers prove that the right amount of humour and heart is given to each character and their overall impact to the film’s touching, sweet and most of all, realistic finale.

Tender, endearing and empathetic to the relationships, bonds and constantly changing dynamics between young adults and aging parents, 🐔 Blockers has an uncanny ability to become so much more than a typical, two-dimensional comedy 😂 film filled with unmemorable characters. Instead,🐔 Blockers becomes a complex cinematic family event which raises questions of the double standard in the household, both domestically and internationally, between sons/daughters and mothers/ fathers, keeping the focus on the story, and the fun and patriarchal lessons intact.

Thanks to 🐔 Blockers, a new generation of family loving cinephiles 🎥 can share and enjoy a family centric spring release 😂 that finds the humour in butt-chugging 🍻 🍺, parents deciphering teenage text messages📱📲 , emoji 😂🍆🍑🤝☝👌 conversations and most of all, the ridiculousness of ad-libbed teenage lingo. “Sex friends for life!”  Blockers is a film to cherish, embrace and most of all keep unblocked 🚫 for good.

What did you think of Blockers? One of the best comedies of 2018 or a bust? Are you ok with it, or having trouble translating the emoji’s? Leave your emoji’s/reactions to the film below!