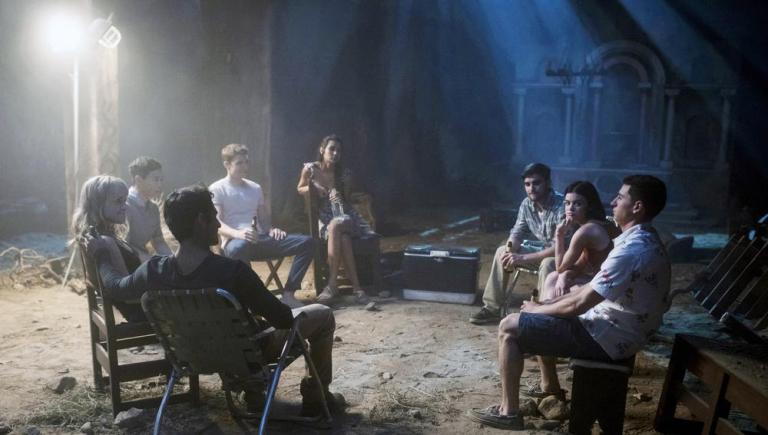 Imagine if Willem Dafoe and Jack Nicholson’s the Joker had a baby and was captured with that disturbing and oddly sinister SnapChat filter that embellishes your mouth. Now imagine that offspring haunted and followed you around declaring you choose “Truth or Dare” in a twisted game of survival, untimely death and mutilation. Well, if you’ve pictured that perfectly in your head, then you’ve visualized the type of disturbing and demonic visions torturing a young group of teenagers who have played a deadly game of truth or dare in Mexico.

Aside from the film adding to a long list of reasons why young teenage Canadians should NOT visit Mexico during spring/march break, Truth Or Dare is the latest low-budget horror film to come out of the infamous and highly profitable Blumhouse production house, spearheaded by Jason Blum.

Blum, who has gained quite the reputation in Hollywood for profiting big on low-budget horror films for the last decade, on film series like The Purge, Paranormal Activity, Insidious, Sinister as well as the extremely well received and Oscar winning film Get Out, seems to still has a soft spot for B-level teenage horror films based on simple premises.

With his latest, Truth or Dare, a film that was pitched just from its title and an opening scene that was thought-up of on the spot between director Jeff Wadlow and Blum in a meeting room, Blum surely doesn’t intend on showing much originality or any intent on following up with his highly praised Get Out, even if Truth or Dare doesn’t even compare to his last film Happy Death Day, a fun film that spins the very familiar Groundhog Day narrative motif on its head, adding the right amount of blood and gore.

“Do the dare, or you die. Tell the truth, or you die” are really all the rules you need to know when it comes to the game, although the game does make its own rules as the film progresses, making it really hard for Olivia (Lucy Hale), Lucas (Tyler Posey), Markie (Violett Beane) and Brad (Hayden Szet0) to come out of the game with their lives.

While many of the truths that are revealed between the young group of friends, there isn’t much revealed that would be worth losing your life over. Sure, there are some confessions of crushes surfacing, as well as sexual preferences being forcefully admitted to and true loves being named, but other than that, the stakes of their virtues and truth really aren’t that menacing. Director Jeff Wadlow, who has had experience in the horror genre with his much better debut feature film Cry Wolf, shows the lack of originality and the dependency of jump scares and cheap thrills that fall flat.

While I have always been terrified of menacing faces, the demon Calax, who is possessing this group of teenagers, shaping their faces to those eerie smiles, is lacklustre at best. Looking more like a cheap SnapChat filter, the frights (like the $3.5 million budget) are low in Truth or Dare.

While I dare you to find any real character development in these paper thin teenagers who suffer from what would be the definition of ‘first-world problems’, one cannot help but noticed just how daringly bland Truth or Dare really is. Taking cues from previous horror films whose main demonic entity is completely invisible, like The Final Destination series and dare I say the immaculate It Follows, Truth or Dare seems to emulate too much without offering much else to the genre. Most of all, not that anyone was expecting a film like this to be an Oscar contender in 2019, but these types of films rely heavily on one of its most important qualities, and that is being a fun time at the movies. But like any crappy dare you need to fulfill, watching Truth Or Dare is more of a chore than a pleasure.

Truth Or Dare is teenage horror fare looking to cash in on mediocre first week numbers, and a film that will quickly disappear without ever being remembered. Hypocritical from start to finish, boasting way too much exposition from the opening scenes in Mexico to an ending that was way too sinister for its own good (which also one of the few redeeming factors of the film), Truth Or Dare is a film that we hope doesn’t inspire a horror film franchise series aptly titled “spin the bottle” or “seven seconds in heaven”.

Truth be told, we dare you to leave your honest and truthful comments on the film below. Tell the truth…and you live…ok, maybe not, but it would be fun to hear what everyone think’s of Blumhouse’s newest. Get Out caliber, or Ouija all over again?