Whatever you do, don’t look down!

Hope that you aren’t scared of heights, because if you are, Dwayne “The Rock” Johnson’s newest film might be a little hard for you to swallow and watch.

The hardest working actor in Hollywood is back, and this time, teaming up with the man behind the hit cult comedy Dodgeball: A True Underdog Story and We’re The Millers. But instead for opting for a straight up comedy, the two team up to deliver a Die Hard inspired and overly-stylized The Towering Inferno film that is meant to be the ultimate summer movie. Skyscraper is blockbuster, Hollywood entertainment like we have never seen before. Taking cues from the best and worst summer blockbusters before it, Skyscraper is a non-stop, high octane, adrenaline filled popcorn flick for everyone.

Like any movie Dwayne Johnson does in his career at this point, he adds his undeniable charm and heart into each and every project, and the same could be felt with his newest. What makes Johnson’s Will Swayer so likeable, aside from the fact that he is the ultimate family man, who will back down to no challenge involving his family, is the fact that he is modelled like any family man before him. Relinquishing his duties form the military following a rescue mission gone wrong, Will is faced to live the rest of his life with only one leg. Luckily for him, with every painful path in life, comes beauty. Sparking a romance with the doctor who saved his life, Will finds his life ten years later in Hong Kong, as a security assessment official, who must now give his expertise and knowledge to the largest free-standing building in the world, The Pearl. With a little help from an old friend Ben (Pablo Schreiber), Will pitches his small-business motto to Zhao Long Ji (Chin Han), the architect behind The Pearl, only to land the biggest deal of his life. Excited to share the news with his family, Will celebrates his big accomplishment with his best firmed Ben, only to find that The Pearl has been taken hostage and set ablaze, with his family still in it.

From the first day of production, Skyscraper was always hailed as a homage to so many high-rise tension filled films before it. While no one ever believes anyone will be able to replace John McClane, Johnson is easily a very comparable action star with massive commercial appeal. Oozing with charisma and charm, Johnson’s character will not only becomes likeable for his personal quality traits and his unpardonable love for his family, but I’m sure that one of the biggest selling points of this film, was the fact that Johnson’s character is in fact, disabled. It is almost unheard of that action stars are in fact, disabled ex-military personnel who are still capable of kicking butt and beating bad guys. Not only does Johnson play Sawyer with class and bravado, but the film also highlights many times where his prosthetic legs becomes a tool for rescuing his family, as opposed to a weakness. This narrative driving force, and this one alone, is one of my favourite and most enjoyable, as well as respectable character traits, in recent memory in the summer blockbuster genre. 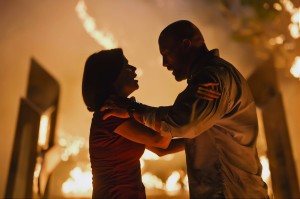 It is no surprise that Hollywood loves Johnson right now, inflicting him into, practically, every franchise available at the moment. With that said, it has come to a surprise to me that Johnson has not been inducted into the MCU yet, but I am sure time will tell.

While many would be surprised to seer Neve Campbell cast as Sarah Sawyer, Johnson’s wife in the film, it only goes to show how powerful Johnson’s presence is on screen, even when actors who have been absent from the silver screen are able to come back to revive their careers for smaller roles like this one. While the only name that matters on the movie posters may be Johnson’s, one of the best actors cast in the film is a person favourite of mine, Roland Møller, the certified baddie in Skyscraper. While Møller’s Kores Botha doesn’t have much intent, fibre or much to do or say within the film, but it is always great seeing foreign actors breaking through into Hollywood films. Møller was astonishing in one of my favourite foreign films in the last couple years in Land of Mine.

Skyscraper surely will have many palms sweating, many hearts racing and people forcing themselves to cover their eyes thanks to some very crazy and absurd stunt work and visual effects of Will Sawyer jumping, dangling and racing in and around the fictional largest building in the world. Skyscraper is the typical escapist summer blockbuster film of the year, and one that, for maybe two hours out of your summer, will be a satisfying retreat into the air-conditioned theatre away from the heat that is outside, even if more than half the action in the film is borderline ridiculous.

Skyscraper is just another entry into the very expansive filmography of Dwayne Johnson, further reinforcing just how wonderfully suave and likeable he really is. If you don’t like Johnson now, you better, because by the looks of it, he isn’t going anywhere for a long time.

Buckle up, fasten your seatbelts and enjoy the ride because Skyscraper will have your face melting by the time the end credits roll, thanks to all the gravity-defying, absolutely absurd action and set pieces that will surely have you squirming in your seat.

Is Skyscraper your taste of summer blockbuster? How many of the latest Rock films are you enjoying? Is Skyscraper bigger, badder and better than Rampage? Leave your comments and thoughts below, and remember to not look down.