“Favour is a breeze that shifts direction all the time.”

Lathimos’ third English language film following The Lobster and The Killing of a Sacred Dear is an exploration of the absurdities of the rich, powerful and bored.

Yet no matter how many clever indications one my make about the film’s title or the various tongue-in-cheek references that could be used to describe the film, or even Lathimos’ canon as a whole, it comes as a surprise to many that the director’s most tamed and least ghastly and disturbing film to date, is by far his most ravishing yet.

While the specific genre of the film has yet to be determined, Lathimos’ The Favourite is a hodgepodge of cinematic tropes; part black comedy, part period piece, part love story, part cat-and-mouse thriller, part buddy comedy, part completely insane, the film deconstructs everything that you expect from all of these categories of film and throws them completely on their head with immense style, fashion and perfection. To say The Favourite will be like anything you’ve ever seen, is a direct and misleading understatement, much like the characters it presents.

Written by Deborah Davis and Tony McNamara, The Favourite marks the first film Lathimos has not written a script he has directed since making his big splash at Cannes in 2009 with his highly unconventional and controversial film Dogtooth. Yet, as much as we appreciate the auteur’s uncanny ability of making people feel uncomfortable using the eeriness and awkwardness of other people by simply interacting with one another, this is one script that feels more Lathimos than any of the ones he has written in the past.

While the film is made during a prominent and very loud #MeToo movement in Hollywood, The Favourite is set in 18th Century England, a land where Queens rule and Kings drool, especially when the Queen is Mrs. Morley Anne (Olivia Colman) ruler of Scotland, Ireland and England and currently waging war against France. While the Queen is surrounded by men, including her military commanders and parliamentary leaders, Queen Anne proves that at the end of the day, the women make the rules and own the house. Yet, as important and iconic Queen Anne is, it becomes clear quickly that Anne is no more of a mere mortal with a crown next to her life-long friend and council advisor, The Duchess of Marlborough, Sarah Churchill (Rachael Weisz). While Sarah is able to wholly intimidate, scoff and insult the Queen right to her face, it seem that Sarah is only looking out for one person and one person only, despite her illusions and deceit. Occasionally giving accord to Queen Anne or her husband for that matter, military commander of the Queen’s army, Lord Marlborough (Mark Gatniss), Sarah is one a one-way ticket to riches, power and most importantly her, affection. 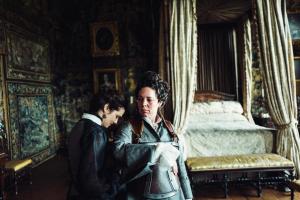 As Sarah seems to seemingly pave a path of success for years to come, things come to a steady halt with the arrival of her cousin, Abigail (Emma Stone). Although Abagail arrives in a heap of mud, discontent and stalked by tragedy, she quickly hardens up and wilts to the whim of her commanding cousin, only to quickly gain her affection and take her opportunity for the Queen’s admiration, following a natural herbal remedy for the Queen’s disgusting gout infested legs. Once Abigail becomes the Queen’s own personal leg-rubber, she begins plotting her dominance over the Queen and her affections, overshadowing her own cousin, proving that Sarah’s protegé as quickly become her biggest and most intimidating rival.

Where Sarah adorns the Queen with her brazen honesty and harsh truths, including advising when the queen looks like a badger, Abigail’s approach to the affections of the Queen include lies, deceit and endless compliments, making the Queen feel unlike anything Sarah never has. Often times eroticizing the Queen and her mundane and bizarre daily routines with her bunnies and while eating, Abigail and Sarah begin to duel for Anne’s love, doing whatever it takes to be her favourite.

As it turns out, each woman is capable of much unpleasantness, not only to one another, themselves but also to the poor saps surrounding them. Manipulating every man, woman and child around them for their own personal gains; both in search of security, status and nobility, Abigail and Sarah turn the conventions of a chessboard on its head, and make the queens, rooks, bishops and knights all of their pawns in their sick and twisted little kinky game of pleasure.

Attacking one another like vipers and wolves, jealousy becomes the weapon of choice for both women, who’s use of men only intensifies their sadistic little game of mitral destruction and decay. Taking no prisoners, Abigail and Sarah create alliances, forms admirable teams with many of the men occupying the palace on a daily basis. Abigail learns quickly that her most valuable alliance is the head of parliamentary opposition Harley (Nicholas Hoult), despite his every opportunity to throw Abigail to the gutter. Although many of the men in The Favourite seem to hold their own against the two duelling cousins, it becomes clear with every ridiculous pastime that the men engage in, that the women, no matter how fragile or understated they are, truly hold the men in the palm of their hands. Where we see the men engaging in ludicrous activities of whipping food at each other while naked, duck races and ridiculous forms of dance, women are the only ones seen holding the guns, aiming and killing their prey and having their faces splattered with blood. The men in The Favourite are covered in make-up, wigs and fancy dress, while the women are stripped of their beauty and shown with the scars, bloody noses and battle wounds. Lathimos makes the gun range backyard the common area for Abigail and Sarah’s verbal competitions, while the rest of the days, they leave their most valiant and best efforts on the line by exhausting the very people they claim to love.

While the war against the French is always a constant plot within the castle, Lathimos and his talent crew uses the palace as a stomping ground for much haste and ugliness, never showcases physical battle rather the coyness and sneaky actions of each woman’s slithering jabs. The trickery of each woman’s constant blows are embellished in absolute pleasure thanks to the captivating fish-eye lens tracking shots of Robbie Ryan’s camera. Shooting tracking shots from an ant’s eye view, upside down, tilting and swinging the camera in every which way and direction, Ryan gives a sense of banishment and fleeting optics to a completely farce security in a castle where allegiance switch at the drop of a pin.

The Favourite may very well be a perfect film and one of the most unexpected pleasures of 2018, but none of that would ring true if it wasn’t for the performances of our three female leads. Constantly engaging in the moral destruction of one another’s characteristics and pushing the limits physically, mentally and most of all, emotionally, our three leading ladies are at the top of their acting games, proving that the Academy may be in favour of royalty. Weisz is as cunning, sharp and ruthless as can be as a woman who utilizes history as a weapon towards establishing a future. Looking as sly as ever, Weisz is bound to be recognized for her performance that transform her soft eyes into sharp diamonds with razor-sharp edges. Stone, although she isn’t singing or dancing, gives the best performance of her career, stripping down her clothing and girl-next door image for a woman capable of anything; including beating herself with a book and bloodying the battlefield of war. Stone’s highly misunderstood pouted lips conceal her snake-like tongue and vicious bite. Yet, both women pale in comparison to Colman, an actress who has probably appeared in something you’ve watched before, but completely and unapologetically demands attention with Queen Anne’s constant eccentricities. Whether dunked in mud, on the floor, covered in absurd make-up or having food hang from the very ends of her mouth, Colman gives a favourable performances that will no doubt take attention during the Awards Season and give new meaning the bondages of portraying a matriarchal Queen. Colman is nothing short of godly.

Self-interest and selfishness is the goal and while casualties are expected, Yorgos Lathimos delivers one of the best movies of 2018. The Favourite favours bold acting, incomparable shooting styles, a magnificent score and one of the most unexpected and gruellingly enjoyable movie experiences of the year, and it asks for no apologies. One may be hard pressed to find something else within the year and may side with The Favourite, because Lathimos proves once again that the deconstruction of human values, is much more fun than building it up. Even though parents always avoid picking their favourites, when it comes to 2018, it’ll be hard to choose a monstrous extravagance as good as this one.