My relationship with Lars von Trier can be described best in one word; boundless. Luckily for myself, although my relationship only began a few days ago with this passionate and highly cynical director, I’m sure glad that a relationship flourished at all. While his name had been mentioned to me in passing countless times, I never really sat down and truly experienced a von Trier film, that is, until I watched The House That Jack Built. Yet, not like most, I experienced von Trier on a different level most people would, attending a very exclusive and rare unrated director’s cut of Jack. To say the least, it is with all honesty and truth, I can say that it wasn’t until I watched this film that I truly understood how far the boundaries of cinema can be pushed.

Typical discussions regarding von Trier’s work usually touch mostly upon the controversies surrounding his films, as well as his unprecedented style, and his penchant for making viewers feel so uncomfortable that their only natural reaction is to walk out of their theatre seat, or turn off the film altogether. While von Trier’s career is ladened with controversy, including a “persona non grata” at Cannes, that was lifted this year for The House That Jack Built, as well as controversy for basically each one of his film’s release since the beginning of his Depression Trilogy, starting with AntiChrist, von Trier seems to be the poster child for auteurs with a warning sticker attached to them.

While very few directors can truly call themselves truly provocative filmmakers, and while it seems that von Trier spends more time debunking this notion that trying to prove himself otherwise, it isn’t hard to reign him as the clear champion of this title. Yet, aside from the controversy, von Tirer has a plethora of qualities that he brings to filmmaking and cinema all together. Always pushing the boundaries, von Trier likes to smear the lines drawn by rating boards and society alike, and Jack is a testament to the very boundaries set by such films and people. While his content is often disturbing and brutal, von Trier also has a sadistic way of implementing a stark sense of humour within the frames of his work. Yet knowing all of these from a true vanguard of cinema, nothing could prepare me for a work made a man hated but loved by many so many people inside and outside of the film industry, and whose work is often misunderstood yet a direct companion piece of the man that is Lars Trier (he added the von himself). 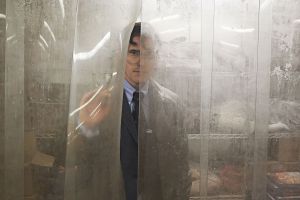 The House That Jack Built is quite elementary narratively speaking; the story follows Jack, an architect who has a severe case of OCD. Jack is played passionately by Matt Dillon, a role since The Outsider that many believed he was born to play, especially given his heavy encrusted facial expressions and naturally demonic and piercingly intimidating look. Yet, the more we get to know Jack, we realize he is a serial killer. Okay, maybe that’s a lie; we know right away and before anything that Jack is a serial killer before he is anything else. So in proper von Trier fashion, the film is presented using chapters, over the course of twelve years, and within those twelve years, we are introduced to Jack and five murders that have shaped the man he is and becomes by the end of the film.

Yet, as rudimentary the narrative of von Trier’s film is, it becomes clear quickly that nothing is square about this auteur and his films. Jack’s devilish narrative is a twisted odyssey into the depths of hell and a psychosis where guilt, empathy and compassion is voided. Yet, after these five incidents are displayed in bloody von Trier fashion, the journey of Jack’s path leads to Verge (Bruno Ganz), a ‘spiritual’ figure who appears and disappears throughout Jack’s life, proving truly von Trier’esque exposition; but keep in mind, von Trier exposition is quite different from Hollywood exposition. Presented in poetic and encrypted fashion, von Trier’s dialogue is nothing short of enigmatic. And while Ganz is a formidable and heavyweight actor, Ganz’s performance, no matter how insightful or mysterious it is, merely serves as a counterweight to the heavy hitting and aggressively spot-on performance given by Dillon. Jack is without question, Dillon best and quintessential role ever, and he will never be better in a film in his life.

While Ganz and Dillon provide the film with some its most analytical, contemplative and philosophical dialogue, speeding through words in a rhythmic yet glaringly sophisticated way, as if written in iambic tetrameter, von Trier’s dialogue still has an incomparable way of showing facets of the director and the many dark and disturbing pieces of himself, in a way that makes the film so personal and reflective. The director, as he does with all his films, shows a piece of himself and gives us a vulnerable look into the demons of his mind, heart and soul as well as exploring the deepest and darkest corners of his psyche. To witness a von Trier film is truly a journey into a disturbed and complex mind.

Luckily for von Trier, there are many talented actors who are willing to explore these dark corners with him. Aside from Ganz, Jack also features some amazing performances from fresh new von Trier faces, as well as familiar ones. Siobhan Fallon Hogan, Sofie Gråbøl and Riley Keough give some of the best performances as murder victims we have seen in recent memory, as well as the always reliable and true von Trier muse Uma Thurman. With each death, comes a new fact about Jack and the past and current present of his mind state, as well as an audience understanding as to why he is a serial killer, the actions towards his choosing of his victims, and most importantly, what we find and share and familiarize ourselves with, a character so horrifying and grotesque, we try to reject the similarities. While many of the women featured (and eventually killed off, this is surely not a #MeToo sensitive film), have no back story or history, they do give Jack some of his most revealing moments. Yet, for almost three hours, its hard to just choose a hand few of moments in the film where we are truly blown away, because the majority of the film is an onslaught of memorable and truly immersive cinema. Simply put, The House That Jack Built may very well be von Trier’s most audacious film to date.

Narratively speaking, von Trier is unmatched by any of his cinematic peers. Yet, while most filmmakers may only have the style down-pact or the narrative touch, von Trier has easily be posed as a double threat. Stylistically, von Trier is a true visual talent, sometimes creating this notion that watching his films and not such beauty, even admits all the blood and gore, is a crime in itself. We build appreciation for his visual pallet quickly. Building off the violence and darkness, von Trier still finds a way for allowing audiences to build a sense of familiarity with his images and characters. Although perhaps, with Jack, our sense of familiarity may not be with the antagonists or victims, but perhaps with the world von Trier creates; a world plagued with violence, grisly news headlines a world sometimes completely spiralling into chaos and out of control.

While von Trier’s film can easily one pegged as ‘fetish filmmaking’, each one of his films themes all have their own harrowingly surrealist aspect to it. While Jack is focused around death and murder, von Trier’s expectations to chew out crowd churning, drawn out, horrifying images is absolutely expected. Sprawling with close-ups, realistic special effects and terrifying make-up, the horror that Jack is manifesting is a manifestation of the real horrors plaguing our own world. Hazy, nightmarish and feverish, von Triers style of shooting in Jack, as well as his use of color, and lighting add a dash of hyper realism into our bloody cocktail lives. 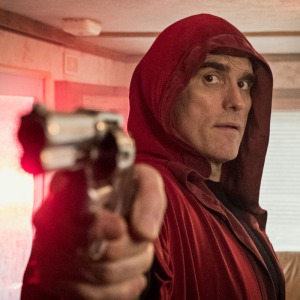 It is without question that Jack is a trouble man, yet throughout the whole runtime of the film, his intention is not to understanding a murderous mind. His actions aren’t meticulous, despite his best efforts, he is not immortal any means, yet, unlike we’ve seen in many films before it, Jack plays upon the idea that maybe, sometimes, the bad guys get lucky too. Often avoiding the authorities, despite many meetings, the audience, often times, laughs at Jack’s terrible blunders and crowning victories. Is this something we are proud of, I mean, if it wasn’t von Trier, probably not, but its easy to root for the bad guy in a von Trier film I guess.

While symbolism and music is a huge part of von Trier’s world, von Trier never says away from his inspirations and images, including using one of his favourite artists in the soundtrack harmoniously, with David Bowie’s song Fame providing the film with an unofficial anthem, even though one can’t help but think that Bowie’s I’m Afraid of Americans may very well be a more appropriate song choice, it just very well be too explicit for von Trier’s liking. The auteur also surely gets inspiration for his zooms from a George Sherman film from the 1970’s, von Trier never feels apologetic for honouring his idols and mentors, as well as an infamous and timeless Bob Dylan pop culture reference. 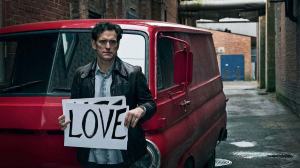 With The House That Jack Built, von Trier proves many things, including that Cannes can easily change their mind, granting “persona grata” status now to the filmmaker, even if Jack had a reported hundred people walk out of the Cannes premiere. Lars von Trier also proves that you do not need to make films that people want to see, but make films that people need to see, slashing his way into the hearts of film-lovers, enthusiasts and cinephiles everywhere; cementing his position as an absolute cinematic genius, in the purest form.

The House That Jack Built is a brilliant analytical look into the mind of a serial killer with little to hardly no answers, but a lot fo questions for its audience. Dealing with themes of identity, self-consciousness, insecurities, morality and mortality, each one of Jack’s murders is a breath of life into an understanding of one’s self.

While one cannot ignore how much of a clear homage Jack is to Kubrick’s A Clockwork Orange, and being able to successfully compare the two films, truly shows the prowess of von Trier’s talent and the significance and marvel of the film itself. As unnerving, unsettling and disturbing the film is, von Trier greatest talent is showing the horrors of ones self on-screen, and what truly frightened me was, seeing so much of myself, in Jack, and nothing could have prepared me for that. Lars von Trier is a master of pushing the boundaries, and while The House That Jack Built introduced me to images I have never before seen in film, it did pique my interest and make me a lifelong fan of a filmmaker whose work and continued works will always lay the foundation to my immersive love for a truly killer art form and its curator.

What did you think of The House That Jack Built? Think you can stomach the brutality? Would you consider watching the unrated, director’s cut, or satisfied enough with the theatrical version? What did you think of Dillon’s performance? Would you like to have seen more of Thurman? Leave us your killer thoughts below, and try not to hurt anyone in the process!