As the clouds roll onto the waving and knotting hills of Scotland, a haze of insecurities, betrayal and bloodshed awaits two powerful Queens; two women whose blood lines and loyalties are blurred by the manipulative and convoluted men in their lives. Yet although history always tells us that men have been at the forefront of politics and royalty, Mary Queen of Scots is a highly dramatized account of the 16th Century events surrounding Queen Mary (Saoirse Ronan) and Queen Elizabeth I (Margot Robbie), two of the most powerful and influential women, not only of their time, but of all time.

As cousins, the two share a very respectful and adorning attitude and relationship, although never meeting according to the pages of history books, Mary Queen of Scots amps us drama for a fateful face-to-face between the two. Young Mary, widowed and eighteen by the time she claims her position as Queen in Scotland, is free-spirited, understanding and audacious. Embracing the many facets of a colourful and diverse world, including homosexuality, Mary’s beliefs and perspectives may be a little too liberal in a 16th Century world, yet we are manipulated into believing anything, especially when Ronan is playing the title role. On the other end, Queen Elizabeth I is a reserved, alienated and scorn barren woman whose fate was almost succumbed to smallpox. Embarrassed and hidden underneath the many layers of white make up to hide her smallpox scars, Elizabeth is riddled with sadness and tragedy, who confidence is hidden underneath elaborate and grandiose dresses that retracts men, even the tenderness and love of a man in desperate search of her love, Robert Dudley (Joe Alwyn). While both actresses are faces of beauty in Hollywood, Ronan’s Mary is the only Queen noticed for her divine and unpaired magnificence. Mary Queen of Scots is just another role to add to Robbie’s recent fascination of diving into roles of women lacking much physical, emotional or mental beauty, despite the actress’ undoubted charm and elegance. Robbie’s interpretation of Elizabeth I is just one more notch under Robbie’s belt solidifying her devotion and passion to her craft. 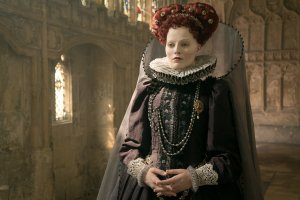 While it isn’t much of a spoiler to know that Mary’s fate is found on the chopping block in 1587, the film begins with her demise, focusing on just how she got their. The film, directed by Josie Rourke and written by Beau Willimon based on a book by John Guy, historians may very well disregard Mary Queen of Scots because it becomes clear that the film is less fascinated with shedding historical and real light on the life of these two reigning women, and play more like a dramatic narrative, very similar to the style and narrative flow of The Other Boleyn Girl a decade prior. While that film features two of Hollywood’s most promising young actresses then, Mary Queen of Scots showcases two of the strongest young female actors of today.

Both Robbie and Ronan are magnificent in their respective royal roles. Overshadowing all of their male counterparts, even with the likes of David Tennant, Jack Lowden and Guy Pearce gracing the screen, Ronan and Robbie are acting forces, elevating the material of the screen, regardless of how potent it every really becomes. Mary Queen of Scots is a masterclass of acting for two very deserving actresses today. 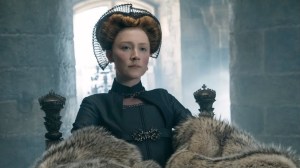 Both actresses, nominated for Academy Awards the year prior, Ronan for Lady Bird and Robbie for I, Tonya, are in a class of their own, Ronan may reign supreme however between the two budding actresses, after all, the film is called Queen of Scots. Ronan carries the brunt of the film’s heavy story material, constantly dealing with betrayals, death and obscenities beyond her control, despite her position of Queen. Ronan’s delicate portrait of a scourged historical figure is riveting.

Sadly, as the film’s story unfolds and the ruse of each woman’s power is displayed in glorious fashion, the film is still bounded by the approval of men, fertility and virginity. Lines like “How did it come to this? Wise men servicing the whims of women”, or “Worse than a plague is a woman with a crown”, the content of the film is wholly vexed by the presence of men. While the royal women have a clear path to attain their goals, the men provide the women and the film with the majority of the narrative’s twists, turns and rivalries to unfold. Emotions, notions of privilege and family drama are the driving forcing for Mary Queen of Scots, proving the line in the film “the matters of the heart dictate the outcomes of countries” unequivocally.

United and strong, Mary Queen of Scots gives audiences a ponder-some conclusion and climax, basically setting up a narrative film for a fictitious meeting between the two Queens. Decorated and flooded with white sheets to separate the two and set in place to avoid any direct face-to-face contact, the film seems to be one big lead up to this grand moment. Yet, while each actress elevates their acting and skills for their respective roles, when this meeting finally arrives, there is a placid and anticlimactic feel that pours water between two fiery performances.

Born from blood and separated by their beliefs and religion, Mary Queen of Scots does one thing right through the duration of its runtime, and that is setting an excellent example of just how religion and faith proves to be another void and obstacle between men, women and human beings worldwide.

Stylized in high Victorian fashion, and picturesque in its foggy presence, Mary Queen of Scots is a satisfying tale of heirs, thrones and the actions of anyone who is willing and wanting to attain such high order and power. While one may cherish these historical figures and their contributions to the pages of history books and today’s way of life, Mary Queen of Scots gives birth to a new, exciting and dramatic take on two unapologetic firecrackers.