When thinking about the comedy-horror genre, there are very few and far in-between films that come to mind. While it may be hard to conjure up a large number of films which remain memorable for quality and not for overall lewdness, gross out gags are born and raised in these types of films. While more often than not, many of the films born in this genre have made, for the most part, a mockery of the genre, thankfully there are a few gems to carry the cultish torch; gems like Sam Raimi’s Evil Dead, Mel Brooks’ Young Frankenstein, or Edgar Wright’s Shaun of The Dead and Scary Movie from the lively Keenen Ivory Wayans remain some of the few films that come to mind right away. All notable and truly brilliant contributions to the genre, these films possess the impressive ability to walk the proverbial tightrope between the equally difficult threshold of outlandish yet effective comedy and frightening and truly terrifying horror. The natural benefit of combining the two is that both commonly rely on similar mechanics for the pay off or climax of scenes. The pacing is similar; you find the same tension that gets built up for a laugh but could easily shift gears and become build up for a gasp, and for both respectable genres, it’s all about the revealing of what we the audience have been waiting for, the killer behind the shower curtain or the perfectly timed punchline.

Happy Death Day 2U is directed by Christopher Landon, a filmmaker who jumped in on the train that was Paranormal Activity after the massive success of the first indie surprise hit. Yet, as devoted Landon is to the genre itself, directing and writing many entries in the comedy-horror subgenre, including 2015’s Scouts Guide to The Zombie Apocalypse, Death Day 2U is a fresh and invigorating take on genre but also on romance, mortality and even includes a dash of science fiction. 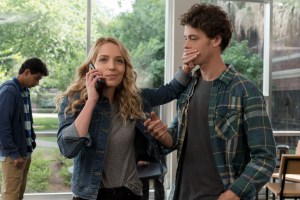 The brilliant, even outstanding advantage Death Day 2U has over films before it of its kind is its show stopping leading lady who is larger than the film itself Jessica Rothe. Death Day 2U is a sequel and we see Jessica reprising her role as Tree Gelbman, the time looped slasher victim of all slasher victims from the first film. This time around she gets caught in the Groundhog Day/Halloween type scenario once again. Let me just say that Rothe plays the role like an ace; funny, down to earth, beautiful and well-timed as a comic, she also crowns herself a worthy scream-queen next some greats.

While the film uses the reviving or reincarnating premise to the fifth degree unabashedly, luckily for the audience, it never feels tiresome; the cinematic gimmick stays fresh. The main plot device is primarily governed by the films main comedic power Phi Vu playing the character of Ryan Lin, a friend of Tree’s who ends up getting stuck in the same “loop” or dimension that Tree was stuck in. With this new dilemma and multiple dimensions in the film, it never feels boring or cliché. One of the dimensions has Tree’s recently deceased mother alive and well, along with her boyfriend Carter Davis played by Israel Broussard dating Tree’s arch enemy from the original first dimension the film started in, these scenes provided surprising and truly moving emotional weight to the film, giving insight to relationships and life overall.

I can honestly say that I was completely thrown off by the films ability to include so many different scenarios and ways for Tree to be murdered with some truly hilarious scenes. Yet all at the same time hold any kind of weight emotionally, the side plot involving her mother being alive is truly heartbreaking to see and did not feel melodramatic or forced. All of the side characters in the film held there weight and served there desired purpose and honestly the entire film is simply good fun. Popular culture references are present and the riffing on Inception and other dimension based works brought belly laughs out of the audience. The horror aspect of the film was designed with what I believe to be simplicity in mind, simple side plots including an affair between a young Nurse who is a friend of Tree’s and a doctor set stage for some awesome suspense sequences. The killer possess zero qualities other than mild athleticism and a brilliantly designed school mascot mask that he dons as he attempts to satisfy his blood thirst, paired with a Michael Myers style kitchen knife as his weapon of choice. The mask is perfect and Landon does a good job at offsetting the usual jump out and scare tactics to actually be effective and a hell of a fun ride.

Happy Death Day 2U is a destined to fail concept, with so many genres and feelings thrown into one mix, it takes quite the perfect storm to turn said mix into a good Manhattan, and let me tell you, Christopher Landon was the perfect bartender for this party. Taking the audience on a roller coaster of emotions yet never feeling jumbled or overwhelming, and with Jessica Rothe stealing the show with her innocent yet punkish university girl charm, Happy Death Day 2U is a well-balanced and tasteful venture into science fiction, horror, comedy and romance, and a guaranteed good time at the cinema.