Not to be confused with the 2001 blockbuster hit Behind Enemy Lines starring Owen Wilson and Gene Hackman,  which spawned a countless amount of straight to video/VOD sequels, with lesser known actors and much less talent, Enemy Lines is a UK produced WWII film about a joint venture between allies to rescue and retrieve a rocket scientist from the grasp of the Nazi regime.

If this plot seems a little too familiar, its probably because it really is. Enemy Lines is a B-movie production made with B-movie intentions and care. The crack team of allied commandos, led by Ed Westwick’s Major Kaminski, followed by an array of lesser known actors and characters, create a violent and suicidal plan to enter the war-torn landscape of occupied Poland. Held together by Kaminski’s bravery and Captain Davidson’s heart (Tom Wisdom), the team risks everything for the lives of one man.

As you can imagine, our group of mercenary allied heroes face an array of obstacles and unplanned adversity, including a rival Russian team intent on capturing the scientist for themselves. Maneuvering through unfamiliar territory and the elements, the team come across friends and enemies at every turn, pushing the limits of their friendship, trust and loyalty to each other.

While the chemistry between the actors, with the exception of Westwick and Wisdom, isn’t anything to marvel at, there is an amusing and somewhat satisfying reunion between Hannah and Johnson, who were both amusing in the 1999 remake The Mummy, giving audiences some sort of nostalgia throughout the film. Yet, as expected from low budget B-film, the acting is never the greatest, the action is always sub-par, and of course, the movie itself tries to take itself more seriously than it ever should. Yet, despite the content and it being set during the Second World War, Enemy Lines is a film that thrives off of campy dialogue, some semi-captivating moments and a faux-hawk stolen straight from the 2000s for its biggest acting name Westwick.

While the film lacks any real suspense that one might expect from a war film, it is plagued with ongoing stand-offs and gun battles, which, although not-particularly stylized, are quite entertaining, given the constant use of highlighting blood in the snow and the lingering fate of our protagonists lives hanging by a string.

While the film tries to base the majority of its events in reality, the film is a lacklustre depiction of many scientists and doctorates who were confiscated by the Nazi’s during the war, and used to conjure up weapons that would secure their victory against the allies. Although there never was a Dr. Faber in the war, the character provides the film with the most amount of tragic density, given that his daughter and him are following every bated breath of the allied soldiers to live. 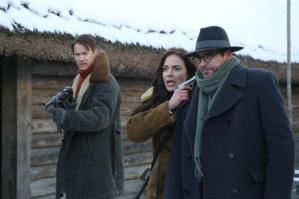 While Enemy Lines won’t be a film that will be remembered for very long, it surely is an opportunity for people stuck in their homes to enjoy some generic war film that will entertain, albeit, pass the time before the next Netflix produced time-occupier comes along.

What did you think of Enemy Lines? Were you surprisingly satisfied or left amazed? Did it leave you dead in the snow or alive with hope? Leave your comments below!